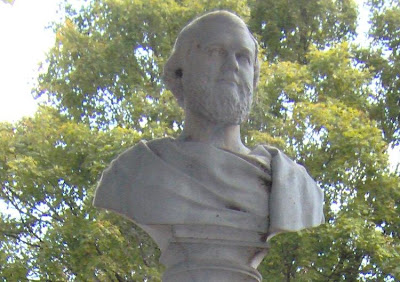 Magoffin, who attended Centre College in Danville and Transylvania University in Lexington, believed strongly in the right of states to secede from the Union. Though he was sympathetic to the Confederate cause, he supported Kentucky's position of neutrality in the war.

As far as Civil War-era Governors go, Magoffin really wasn't terribly notable and his actions in office did little to sway the conflict one way or the other. Historically, he is probably best known for his telegram to President Abraham Lincoln. Lincoln called for deployment of Kentucky troops on April 15, 1861, and Magoffin defiantly responded: "I will send not a man, nor a dollar, for the wicked purpose of subduing my sister Southern States."

After the Civil War ended, however, Magoffin became a civil rights advocate and urged passage of the Thirteenth Amendment.

His main legacy today is that he left behind an interesting tombstone: the Beriah Magoffin Monument is located in Spring Hill Cemetery in his hometown of Harrodsburg. The grave peculiarly renders Magoffin's bust in Neo-classical style, wearing a Roman toga. 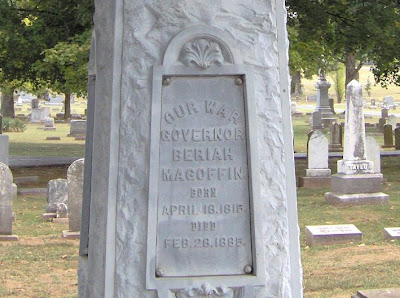