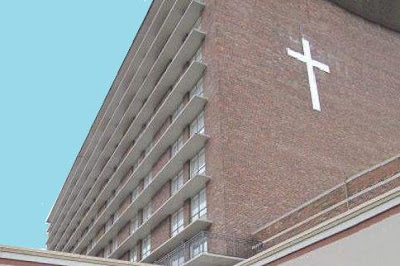 Louisville's Wayside Christian Mission has continually met with resistance from the city over their attempts to maintain a large-scale homeless shelter. No one wanted a homeless shelter in their own backyard, and neighborhoods said no everywhere that the idea was proposed.

Regardless of what one may think about Wayside Christian Mission - I don't know much about them and I'm not even sure what I think about them myself - I gotta say, their solution was a stroke of genius:

They bought a high-rise hotel on Broadway and are charging a penny a room, thus bypassing all zoning regulations that would apply to a homeless shelter.

And the powers-that-be are having a conniption fit! State Senator Tim Shaughnessy has announced: "the state wants that property for the college", meaning Jefferson Community and Technical College. "At the end of the day, the state will take that property."

There have been rumblings about seizing the property under eminent domain laws, but Wayside seems unruffled. So certain are they that they're here to stay, they installed a giant white aluminum cross on the building's north wall last week.
Posted by JSH at 8:22 PM

Crucifixes are one way to try and ward off greedy blood-suckers. I hope it works for Wayside Christian Mission!

If I understand correctly, this facility is primarily for women with children--and only those who have established a responsible relationship with WCM. Despite the griping from our local bureaucrats, this private organization is offering real help to families in need. Way to lead by example, Wayside!

I am a Student at JCTC and i am a former clint of WCM. So i have came to this conclusion and that is thus that even thought the state dosent like it or the colloge dosent like it WCM does have the support of the majority of louisville and the support will constally grow due to the singel fact that thanks to the ruckess the state is giving them they are reciving more donations and more publicty. So in a scine WCM is thankful for the ruckess because it thus helps the need familes of the city.