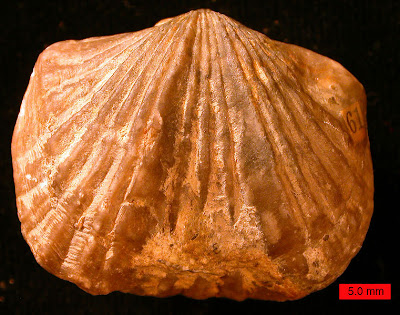 But did you know that Kentucky also has a state silverware pattern? It's apparently called "Old Kentucky Blue Grass: The Georgetown Pattern". And the state beverage is milk. Milk. Not bourbon. Milk. Who dreams this stuff up??

Kentucky even has a state fossil - the Brachiopod. Wikipedia says "they are sessile, two-valved, marine animals with an external morphology superficially resembling bivalves to which they are not closely related. Approximately 99 percent of all brachiopod species are documented solely from the fossil record".
Posted by JSH at 1:06 AM

I've got a handful of those things. They're everywhere! I've even found them among the stones and gravel on the roof where I work.

I was a Geology major at what is now Binghamton University (Binghamton, NY). They changed their mascot name to the Bearcats. I really thought that it should have been the Binghamton Brachiopods: Filter Feeders with Fight!