Missing Hands (and other stuff) 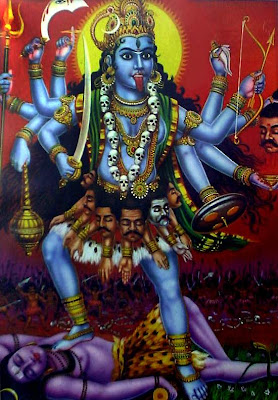 With a topic like this, I thought maybe this would be a good occasion to use this image of Kali.

"I don't know if you know much about this, but there have been reports of people going missing in between Jackson County and Rockcastle County in recent years and if they find the bodies they generally find that their hands have been cut off."

Well, removal of a corpse's hands is an antiquated gangster-style method of making identification of a body difficult, apparently done by persons who forgot about toeprints, teeth, DNA, and other identifying factors. I don't know of any instances of it of occuring down in Jackson/Rockcastle counties, but I don't doubt that such cases exist. We tend to only hear about the ones where the bodies remain unclaimed and unidentified, on websites that keep track of John Does and Cold Case Files, such as:

[A quick note about the missing hands...when I was working at McDonald's, I heard about this guy that had gone missing in the woods of Jackson County, Ky, and the person's body had been found without hands. the last person that was supposed to have seen this person when they were still alive was one of the McDonald's employees from Jackson County, so I decided to ask them about it, and somebody that knew them pretty well was also in the room when I asked, and they said cutting
off the hands was an old mountain punishment -- I guess descended from Hammarabi's code -- for stealing. They made it sound like other people had been found the same way though.

If you're ever coming into Jackson County by way of Big Hill and see an old muddy looking brown truck with the words "Over the Edge" in the back window in front of you try to stay far back and away from it because it almost killed me one day.]

It's good to know the Code of Hammurabi is alive and well in Jackson County. I'm an Ur-Nammu man, myself.

Does anyone recall a woman's body with no hands, supposed to have been shot in the back of the head found in the Mt.Vernon/Scaffold Cane area?

This was sort of hush hush..