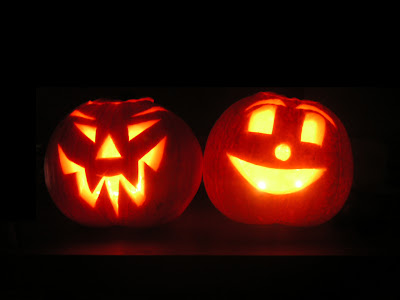 At the home of some hippie babysitter I once had, I used to read those Foxfire books as an impressionable youth. No doubt they had some sort of nefarious influence on me, filling my innocent noggin with all sorts of ideas about soapmaking, butter churning, beekeeping, hide tanning, basket weaving, woodcarving and hog butchering.

But in all of that idle leafing through arcane texts of lost homespunnery, I never did really grok what was meant by the name "Foxfire" at the time.

Years later, I learned it referred to bioluminescent fungi, which is related to the concept of the Will O' the Wisp, which in turn is related to the Irish mythos of Stingy Jack, from whence we derive the mythical Jack o'the Lantern - and that is, of course, in whose honor we carve Pumpkinheads around the Halloween season. 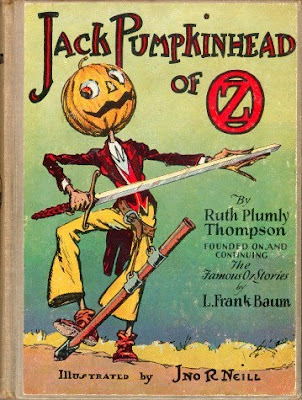 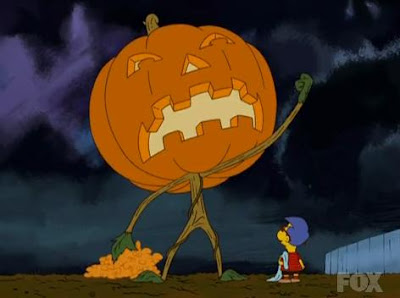 Dave Tabler, on his wonderful Appalachian History blog, recently did a piece about the Jack o'Lantern Mushroom:

If you have ever tramped around the woods after dark, you may have noticed an erie glowing substance on the forest floor. This is the light from luminescent fungi---foxfire. One of the most common fungi responsible for foxfire is Clitocybe illudens, also known as the Jack 'o Lantern mushroom. Makes complete sense that it would be named that: it’s orange, it glows in the dark. But did you ever stop to wonder where the phrase "Jack 'o Lantern" came from?

Tabler goes to tell one version of the Stingy Jack legend - there are many - and you can read more on Wikipedia. For our purposes here, I'll just give you my abbreviated Jeff's Notes version:

Basically, a slovenly but lovable alcoholic lout with a mischievious, trickster mentality encounters Satan, and tricks him into turning himself into a coin, which Jack then quickly thrusts into his pocket which also contains a crucifix. This imprisons Satan who, stuck in coin form, cannot re-transmogrify while touching the Holy Cross. Satan tells Jack that in exchange for freedom, he promises to leave Jack alone for ten years. Jack, apparently not being a very good negotiator, agrees to this.

Ten years after, Satan returns with the intent of killing Jack and taking his soul. Jack again tricks Satan by entrapping him up an apple tree surrounded by crucifixes. This time Jack makes a better deal, and insists that in exchanging for releasing Satan from the tree, he will never, ever go to Hell. Satan agrees to this.

Finally, at the end of Jack's natural life, he floats up to Heaven but is turned away because of the wicked and sinful life of drinking, womanizing and carousing. Apparently being a free-agent of a spirit is very painful and unpleasant, because Jack then decides he'd rather be in Hell than to be stuck in the in-between nether world. Satan gets the last laugh on Jack, saying "Sorry, a deal's a deal - you made me promise you could never enter the gates of Hell!"

Jack is forever doomed to wander in limbo and on Earth, unable to ever rest his soul in Heaven or Hell. Some versions of the story have him holding a lantern consisting of a candle inside a hollowed-out turnip; in others, it's a rutabaga, a gourd, or a pumpkin. Somewhere along the way, his actual head became that hollowed-out flaming vegetable lantern. 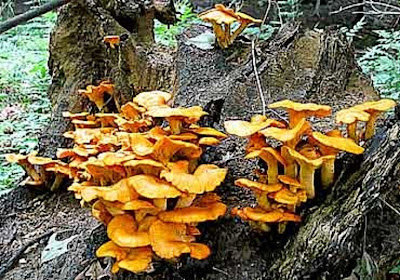 Meanwhile, back to the mushroom, I should also point out that it is extremely poisonous, but looks very similar to the highly edible Chanterelle mushroom which is equally common in Kentucky. If you aren't 100% percent positive, do not eat. (And of course, the corollary is: make sure you have the right shroom so that you don't sit in the darkness staring at a Chanterelle and waiting eternally to see the bioluminescence.)
Posted by JSH at 12:03 AM