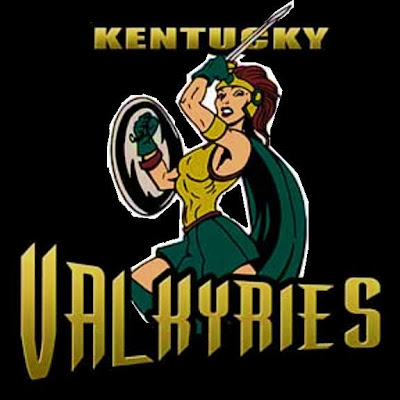 Kentucky's about to have a new national women's football team: the Kentucky Valkyries are due to spring into action in 2010, playing full-contact no-compromise football.

Although their owner is apparently based in Tennessee, the Kentucky Valkyries are headquartered in Bowling Green, KY. They'll be part of the Mid-Atlantic Division of the Women's Football Alliance, alongside the Kentucky Karma, the Columbus Comets, the Cleveland Fusion, the Pittsburgh Force, the Cincinnati Sizzle, and a bunch of other teams I've never ever heard of.
Posted by JSH at 12:00 AM

What a great archetype! I guess if we're going to have more team-sports here, at least we get a mythically-spectacular mascot--and I bet the folks at Lebowskifest are doubly glad. The graphic-novel style logo is also pretty darned cool in my book. Promethea rises! :-)

Interestingly, we already have some Valkyries in Louisville by way of Sacred Heart Academy. They are well-known for a variety of formidable athletic teams.