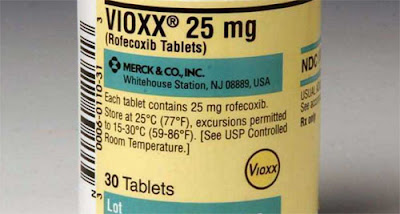 Well, well, this just isn't Big Pharma's month: only weeks after Pfizer was caught defrauding the public about their ineffective and dangerous products and was forced to agree to a $5.4 million Kentucky settlement, another giant in the pill-pushing industry has been busted.

Kentucky Attorney General Jack Conway has now filed suit in Franklin Circuit Court against the pharmaceutical giant Merck & Co. alleging that the company lied to consumers about the risks associated with its anti-inflammatory drug Vioxx (Rofecoxib).

Conway's suit says that he is seeking "injunctive relief, civil penalties, and other equitable relief", alleging that in May 1999, Merck began an "aggressive and deceptive" campaign to promote Vioxx for the relief of conditions including osteoarthritis and menstrual pain but failed to mention the increased risk of cardiovascular complications, including heart attack and stroke. "This kind of deception puts consumers at risk and will not be tolerated in Kentucky", Conway said.

The FDA reportedly estimates that the total number of US Vioxx deaths may be between 89,000 and 140,000. Worldwide Vioxx deaths are estimated to be between 150,000 and 200,000, though these estimates have not been confirmed officially. The number of people whose bodies have been damaged to some degree because of Vioxx is far higher: according to Wikipedia, over 80 million people have been prescribed Rofecoxib at some time.

(Merck, by the way, is the same bunch of charmers who brought you the contaminated Hib vaccine, the dangerous cervical cancer vaccine Gardasil, antibiotics with broken glass, and the controversial SV40-tainted polio vaccine which apparently they've known about all along.)
Posted by JSH at 12:20 AM

Additionally, Merck spent millions trying to persuade our Legislature to make Gardasil mandatory for eight-year-old girls, when their quality control is beyond shoddy and the HPV 'vaccine' is nearly untested on girls that age (it actually only inoculates for 2 or 3 of the known papilloma viruses--and only a correlational, not causal, relationship between HPV and cervical cancer has ever been established).

As a side-note, I know one lady in Kentucky who tried to get the vaccine but was turned down and told that it had not been tested on women over 26.

Thank you for another informative and very interesting post. I chalk one up for us good guys!