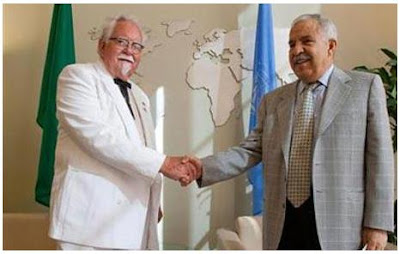 It's one of the most brilliant - and insane - promotional stunts I've seen in a long, long time. No, I'm not talking about The Heene Family Balloon; I'm talking about Colonel Sanders invading the United Nations. According to the Telegraph:

A man impersonating the Kentucky Fried Chicken founder Colonel Sanders managed to dupe his way into the UN headquarters in New York and shake hands with a senior official.

Dressed in the fast food icon's familiar white suit and black bow tie, the actor evaded tight security to gain access to the restricted areas of the complex.

He even posed for a photograph with Ali Treki (علي التريكي), the new president of the UN General Assembly, before the alarm was raised and he was ejected.

A spokeswoman for Ban Ki-moon, the UN secretary-general, yesterday said that an investigation had been launched into the security breach, which was dreamed up by KFC as a promotional stunt... As part of its campaign to promote a new menu range, KFC is "lobbying" the UN for the fictional Grilled Nation to be accepted as a member state. 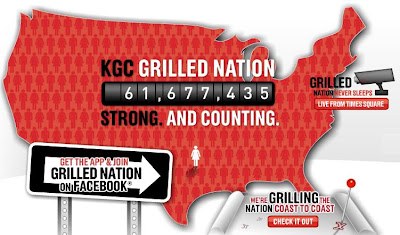 I'm tellin' ya, Colonel Sanders Impersonators are shaping up to be a major meme of the 21st century. Wait and see.

I think it might have been ill-advised (okay, okay, I know, I know, the whole crazy scheme was ill-advised) to have the Colonel pose for a photo-op with Mr. Treki though. Treki has recently come under a lot of fire for his recent anti-gay statements to the media, and many are calling for his resignation. 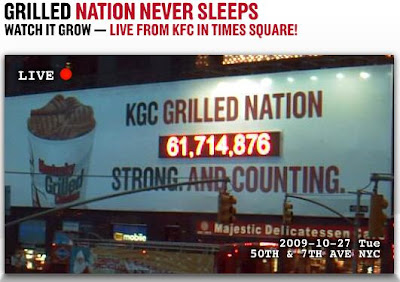 They even have an electronic billboard on Times Square in NYC counting the new recruits to "Grilled Nation". (I'm not sure how they compute that. Are these actually the number of units sold?) I think the Colonel's Grilled Chicken is dee-lish and have tried it several times, so I guess I have honorary citizenship in Grilled Nation. Nevertheless, I'm all about friedness.
Posted by JSH at 12:05 AM

A quick perusal of this article and my aged eyes thought that the text read "Grillo Nation" ... I guess I've been reading this blog far too many years ...