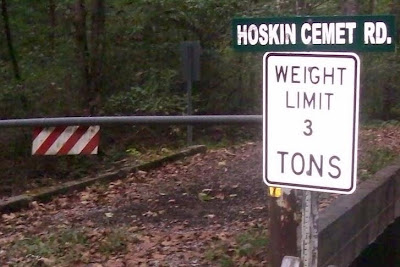 I say "alleged" now, because the London Sentinel-Echo is reporting that the original Associated Press report about Sparkman was filled with factual errors. Contrary to previous reports, the Kentucky State Police are now saying that although a rope was around his neck, Sparkman was not hanging from a tree.

Check out McCain's report and photos here. (Photo above from McCain, photo below from AP) 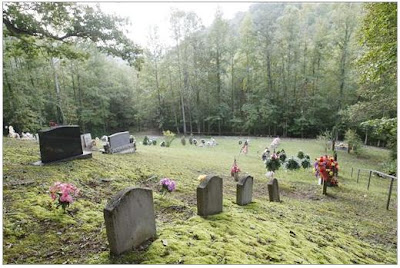 Hoskins Cemetery (located at Lat: 37.1184229, Lon: -83.5874134) is referred to by some sources (and even by the road sign pictured here) as "Hoskin Cemetery" but that's a typo that's taken on a bit of a life of its own... it's clearly "Hoskins" because it was specifically created by and for the Hoskins family.

Google Maps shows the cemetery as being quite off the beaten path, but the aerial photography also seems to be indicating a major road running near it - one that isn't on the actual map. McCain must have had a heck of a time finding this place. 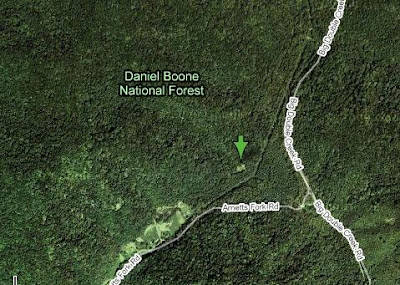 I suspect that whomever the killer was they must have had a drug operation and been a relative to an elected official in Clay County otherwise there wouldn't be a coverup.

that "major road" is a path for high-tension power lines, most likely. You can see them cutting through the forest in most of E. Kentucky

Could very well be, but on the other hand, if one scrolls further up, that mystery line seems to dovetail with the actual road at a couple of points. Google Maps has a tendency to be wrong about placement of roads in deep rural areas, and often one sees photo imagery with roads not quite matching up with the maps generated.

I only mention it because I'm curious about just how far from the main road the cemetery really is, and what this would mean for the easiness of getting away with something like this.