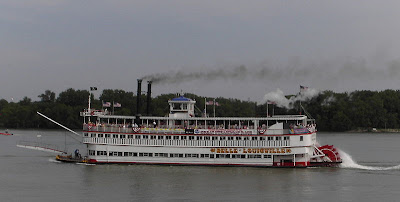 This past weekend, the Belle of Louisville had an unfortunate incident about a quarter-mile north of Harrods Creek: reportedly a strong and unexpected gust of wind blew the ship off course, crashing it into a parked barge on the Ohio River.

According to FOX News:

Belle of Louisville CEO Linda Harris told The Courier-Journal of Louisville that about 300 people — many of them elderly — were aboard the steamboat and that about six to eight people suffered minor injuries.

David Karem, executive director of the Waterfront Development Corp. that manages the Belle for the city, said the steamboat was pushed into the barge by a strong wind while it was on a public cruise that started around noon.

According to various online sources, the Belle is supposedly haunted by a former Captain named Ben Winters who died on board from a heart attack. Paranormalknowledge.com says:

Workers have also died in both the engine room and by the paddlewheel. One of these men was crushed to death when a piece of machinery was turned on by accident, and the other man was killed while conducting maintenance on the paddlewheel because it went into motion. Ghostly activity has been known to occur in these areas, primarily in the morning hours when just the workers are around. When new people begin working on the Belle of Louisville, they are told that they may potentially experience paranormal activity.

Robert W. Parker's Louisville Ghost Walks site suggests that the steamboat's name may be part of the reason for the ghost of Captain Winters' displeasure. The boat was originally called the Idlewild but was renamed to the Avalon on his deathbed, as his final request. (Does anyone know why he made this request?) But in 1963, it was changed to the Belle of Louisville.
Posted by JSH at 12:08 AM

Well Avalon was the island that Arthurian heroes were supposed to be ferried to by boat after they died, so maybe that has something to do with why he would want it called Avalon. Maybe that's where he wanted to go after he died.