Cathedral of the Assumption 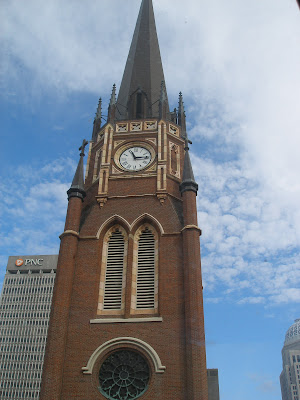 I was up on the 6th floor of the Republic Building in downtown Louisville the other day, and took a few shots of the adjacent Cathedral of the Assumption from a hallway window. 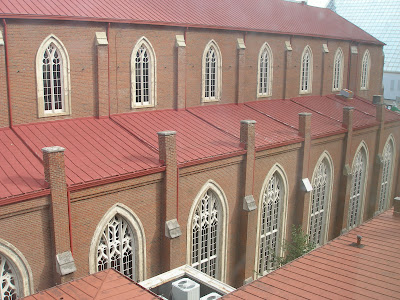 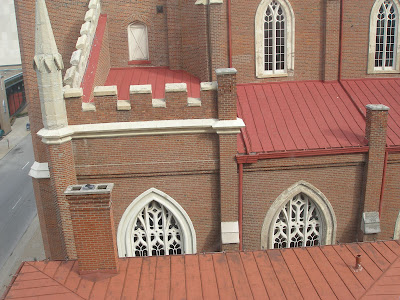 The Cathedral was nearly destroyed during the Bloody Monday Riots of 1855. George D. Prentice, the openly racist and bigoted editor of the Louisville Journal (which later merged with the Louisville Morning Courier to form the Courier-Journal of today) used his paper to foment inflammatory anti-Catholic, anti-Irish and anti-German sentiments, and accused these groups of fixing elections. According to Wikipedia:

The rioters, led by Know-Nothing political figures who bolstered their ranks with paid thugs brought to Louisville for the express purpose of causing trouble, targeted Irish Catholics and Germans (primarily Catholics but Protestants and even German Jews were also caught up in the melee — the key being that they were German). By the time it was over, more than one-hundred businesses, private homes and tenements had been vandalized, looted and/or burned, including a block long row of houses known as Quinn's Row. Conservative estimates place the death toll at 22, while more realistic estimates, including those of Bishop Martin Spalding of Louisville, placed the death toll at well over 100 with entire families consumed in the fires. Citizens were dragged from their homes, attacked on the streets and in their place of work. Weapons, arms and later bodies of the dead, were stored in Louisville Metro Hall (the old Jefferson County Courthouse, now the Mayor’s Office), a Know-Nothing stronghold at the time. Sporadic violence and attacks had occurred in the year and months leading up to August 6 and continued for some time afterward...

Only by Louisville Mayor John Barbee's intervention — himself a Know-Nothing — was the bloodshed and property destruction brought to an end, including his personal intervention that saved two Catholic churches, the new German parish of St. Martin of Tours and the Cathedral of the Assumption from destruction by the mob. No one was ever prosecuted in connection with the riots. The legitimately elected Mayor of Louisville, James S. Speed, had been ousted in June by a court order. Speed, who upon his marriage, had converted to Catholicism, would leave Louisville for Chicago never to return.

The riots had a profound impact on immigration to Louisville, causing literally more than ten thousand citizens to pack and leave for good, most to St. Louis, Chicago and Milwaukee, and a large group who left in 1856 for Prairie City, Kansas). 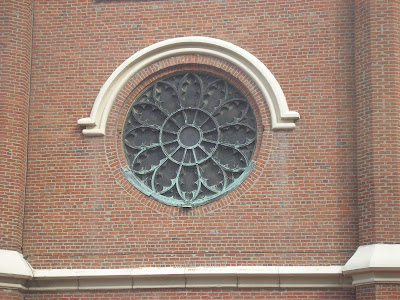 Since 1988, the Cathedral has been undergoing extensive renovation, not only restoring it to its antebellum glory, but making it even more majestic than ever. The grand re-opening of the Cathedral of the Assumption was celebrated in 1994, with a completely renovated Cathedral space, and further improvements are still ongoing. You can check out an interesting audio tour of the building on their website.

They also operate the School of Spiritual Growth, which periodically deliver lectures on various topics of interest to Catholics and non-Catholics alike. This very evening, in fact, they're holding one entitled "What Are We Learning About God From Our Universe?" at 7pm in the Cathedral Undercroft for a $5 fee. 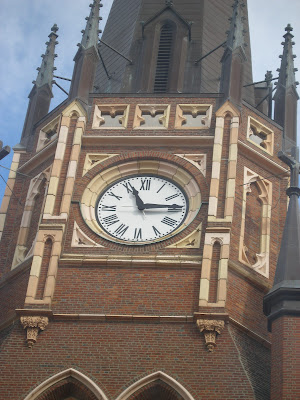 I'm increasingly interested in taking pictures from windows and rooftops of tall buildings and structures, getting seldom-seen views - especially using the zoom lens to catch high-up architectural details that are virtually invisible from the street. I'll use the high views tag to mark these in the future. Below's another shot from the same Republic Building window, but pointed down at 5th street. 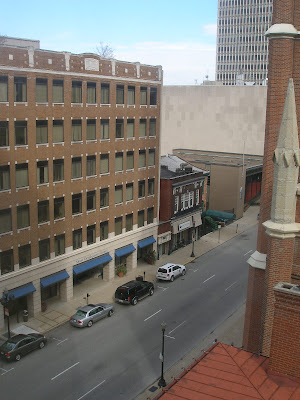 Another unusual aspect of the Cathedral is the crypt of Bishop Flaget in the Undercroft. Here is the account from Waymarks.com:

"Bishop Flaget died on February 11, 1850, a few months after the laying of the cornerstone for the new church building. His remains rest today in a crypt in the Cathedral Undercroft."
http://www.waymarking.com/waymarks/WM2T6P

Of course, the parallel history is interesting too: The history of the Archdiocese and the original diocese of Bardstown.