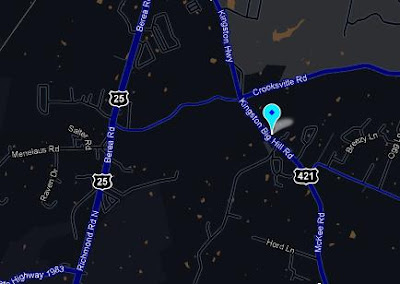 I often bemoan how the internet is increasingly cluttered with junk data, and here's a prime example. Check out this Topix post made last weekend, advising us of some alleged paranormal phenomena described in only the vaguest possible terms:

Lots of strange things have been happening around the area of kingston. Strange lights in the sky and weird shadow-like things seen moving on the streets and through peoples yards. It seems like it came out of nowhere. I first noticed it a couple of weeks ago. No one around here is talking about it though.

(Am I some sort of jerk for wanting people to actually communicate if they're going to communicate?)

Fortunately, one of the few - very few - useful things about the interactivity of the internet is that sometimes a post of useless rumors can lead to others chiming in with more detailed reports:

I'm glad I'm not the only one who has noticed. I live in the Kingston area (Bobtown) and it's been going on for quite a while now, actually.

There's been a few curious incidents (I've seen quite a few shooting stars or what appeared to be shooting stars over the course of the course of the past year and a half) but on Friday October 23rd, 2009 around 6:00 to 6:30 p.m. sometime far before the sun had started to set and dusk started to settle in, I observed a strange white light in the Eastern sky that seemed to be located somewhere in between Smith Lane and the end of Blue Lick Road. It looked just like a bright, white star in the daylight, moving quite slowly. I observed this peculiar anomaly for about a minute and a half before it finally vanished behind a distant tree line. I haven't seen it since.

Well, okay, this is better. Now we have a time, a date, and an actual location. Even if the story turns out to be nothing, at least the post seems made in good faith, and is real data, not junk data.

Unfortunately, the poster doesn't tell us what is such a "peculiar anomaly" about a point of light moving slowly thru the sky at dusk. The poster doesn't say why he doesn't believe it was a plane, which is what it sounds like.

I for one know that there are strange things happening in the Kingston Area, i live beside Kingston Elementary School, i see a lot of bright lights in the sky in the kings trace sub. There have also been people saying that their car alarms are going off at the same time almost every night. I dont know whats going on, but it's creepy. And if i'm not mistaken that area was a battlefield.

I see what are essentially less-than-100%-identified lights in the sky every day. For it to be something really strange or weird or spooky or creepy, it had better contain a bat-frog-man or have a pulsing light and throbbing hum. It better look like 2001's monolith, or freak out an entire airport, or contain aliens who tell you to "Drop the Tunug!"
Posted by JSH at 12:00 AM

I might be able to shed some light on this...(no pun intended) If you get on the Richmond thread and type in "karnes" you will find a couple of threads devoted to a supposed "urban legend" which revolves around a woman who used to live in a house that is now part of the depot. Her name was (supposedly) Lilliam Baines Karnes. She apparently killed some people, leaving only their eyeballs, and the area around her house is meant to be extremely haunted. Even the government bought up her land to keep people from going on it. Sounds cool, huh?

Well, not exactly. The story is entirely made up and started sometime over the summer. There are a couple of people on the thread who all post under different names, encouraging the story to continue. Some people are buying into it. In essence, they are trying to create an urban legend and it's actually quite an interesting process.

As far as the Kingston topic, the same thing was posted on the Richmond thread in reply to one of the Karnes stories. Apparently, Miss Baines is supposed to come back and haunt us on Saturday night and now people in the Kingston area are saying that they are seeing sightings of her.

Again, not true. All made up by some fun people on topix, as far as the Karnes story goes.

Actually, some people in Kingston might really be seeing things in that area, bt it is highly doubtful that it is related to the Karnes mystery. Then again, it could just be more people encouraging the story to continue.

I live in Jackson County which is close to Kingston and see unusual lights (unusual to me in that I don't really know hich types of aircraft they belong to) in the sky every night which could be the same ones, but I'm almost always sure they are just a mix of commercial, private, and military aircrafts.

Only two to three times in the last fifteen years have I see anything I considered to be more anomalous than that. One was an incredibly fast moving strobing object which could have been a meteorite, and the other was an instance of very slow moving ghostly type lights.

Both incidents were over five years ago.

I did hear the big boom in the sky that was supposed to be the exploding satelite about six moths to a year ago I think.