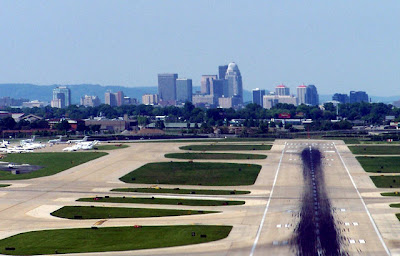 Roger Marsh of Examiner.com is covering recent MUFON reports in his latest column:

Reports of UFOs over Louisville International Airport on June 24 may include multiple sightings from various employees, according to witness testimony from the Mutual UFO Network (MUFON) database.

A package handler at the airport first heard a report over his radio about 10:30 a.m. that there was a UFO over the North South runway. The man did not see anything at that time, but at 1:55 p.m., he saw a reflection in the sky from the south end of the runway.

“As this object came closer," the witness stated, "I could make out it was rotating and was a cylinder, then was a diamond shape.”

He said the object moved in a straight line over the runway at a slow and steady speed at a point just under the cloud cover, approximately 1,500 feet. The object stopped at the end of the ramp and hovered for 30 to 45 seconds, then moved up into the clouds and disappeared.