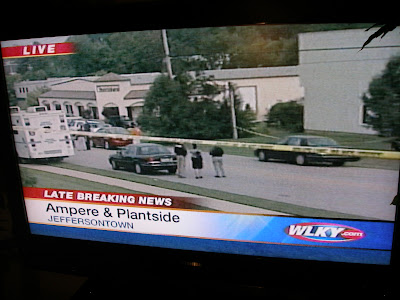 Yesterday, a crazed gunman took over Lyndon Millworks, a woodworking factory in Jeffersontown's Bluegrass Industrial Park, and held one man hostage at gunpoint.

WLKY was reporting rumors that it had something to do with the gunman's spouse or significant other, but details were sketchy. Cherchez la femme.

According to the Courier-Journal:

At 3:36 a.m. Tuesday, the gunman inside Lyndon Millworks in the Bluegrass Industrial Park ended contact with Louisville Metro Police who had been in communication with him since the incident began around 3:30 p.m. Monday, according to Maj. Chris McIntire of the Jeffersontown Police Department.

A short time later, SWAT team members who had been stationed outside the business heard at least one shot, then saw the hostage come out unharmed, McIntire said. McIntire said he had no reason to believe that officers fired their weapons during the incident.

The gunman, who was not an employee and had no relationship to the hostage, was taken to University Hospital with life-threatening injuries. The names of the the hostage, who is the owner of the business, and the gunman have not been released.

"The hostage just happened to be in the wrong place at the wrong time," McIntire said. 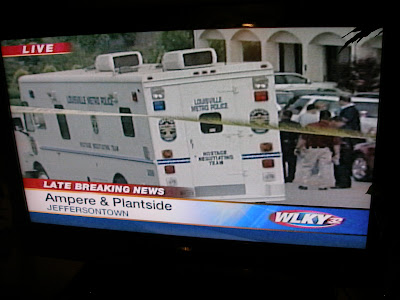 Watching WLKY's live coverage, I was surprised to see a police van clearly labeled "Hostage Negotiating Team". How often does that vehicle get hauled out in Louisville??
Posted by JSH at 6:52 AM