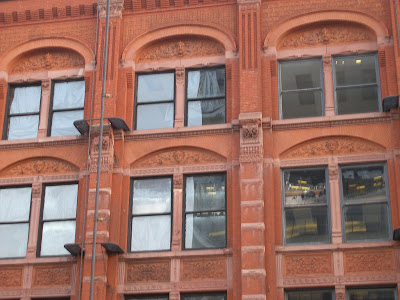 "The Green Man" is a curious architectural motif that goes back to antiquity, and we have fine examples on this downtown Louisville building.

Green Men need not actually be green, as Wikipedia describes:

A Green Man is a sculpture, drawing, or other representation of a face surrounded by or made from leaves. Branches or vines may sprout from the nose, mouth, nostrils or other parts of the face and these shoots may bear flowers or fruit. Commonly used as a decorative architectural ornament, Green Men are frequently found on carvings in churches and other buildings (both secular and ecclesiastical). "The Green Man" is also a popular name for English public houses and various interpretations of the name appear on inn signs, which sometimes show a full figure rather than just the head.

The Green Man motif has many variations. Found in many cultures around the world, the Green Man is often related to natural vegetative deities springing up in different cultures throughout the ages. Primarily it is interpreted as a symbol of rebirth, or "renaissance," representing the cycle of growth each spring. Some speculate that the mythology of the Green Man developed independently in the traditions of separate ancient cultures and evolved into the wide variety of examples found throughout history. 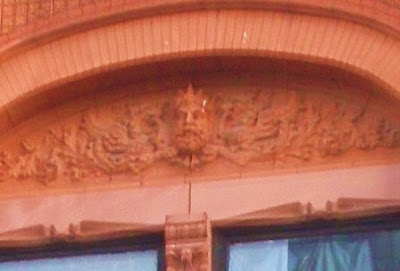 Two different Green Man faces are depicted on this building, one of which wears a beard and a crown, possibly representing Triton or Neptune. It's hard to tell in the image - I need to go back and try to zoom in sharper and closer - but it looks like there's grapes amongst his panoply. If they are indeed grapes, that pretty much fingers him as being my good friend Bacchus/Dionysus, the God of wine, intoxication, and unrestrained revelry. 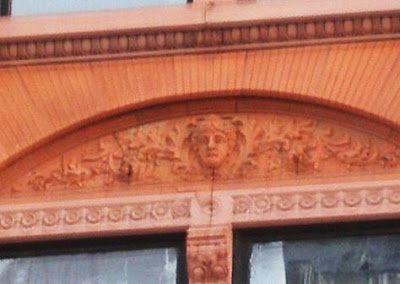 One could go quite mad tracing all the possible branches of all the Green Man's known and theorized lineage. Some have said he's connected to The Green Knight, while others point to Freyr or the cereal-spirit John Barleycorn, or Jack-in-the-Green, or the mysterious Woodwose. Not to mention Lob, Hobs, and Hobgoblins. Even Robin Hood and Peter Pan have been suggested by some scholars as being part of the Green Man's family tree.

But for myself, I'm with the school of thought that says the Green Man goes all the way back to ancient Egypt. Osiris was, among other things, a corn deity, often depicted with a green face and sprouting vegetation that represented resurrection and rebirth.
Posted by JSH at 1:01 AM

There is another fine Greenman, of the crowned Oak King variety (with pointed ears!), on the corner of our City Hall Annex. He is on a door archway, north-west corner of 7th & Jefferson.