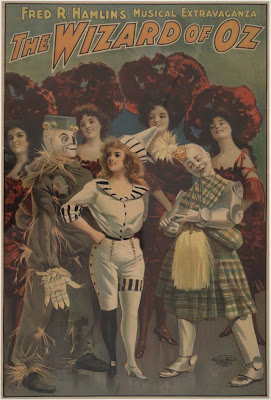 Those of you who thought L. Frank Baum simply wrote The Wizard of Oz and then they made the 1939 movie out of it and that was that, don't know the half of it.

There are actually 40 "in-canon" Oz books, 14 of which were authored by Baum himself. There were five previous Wizard of Oz films (one of which was never released) prior to the 1939 version we all know and love. These present a bewilderingly fractal view of what we think of as the classic story of a girl, a dog, a scarecrow, a lion, and a tin man who seek an eccentric Wizard at the end of a yellow brick road. Most alien of all to modern-day fans would be the 1902 Broadway Musical that continued to tour the nation for many years after its NYC run.

According to the book Oz Before the Rainbow by Mark Evan Swartz, the touring version of the Hamlin-Baum-Tietjens production came to Louisville, Kentucky for a short engagement of just three days: February 15, 16, and 17, 1904. Because of the immense popularity of the Oz books and the musical, these shows were surely packed in attendance to the rafters.

What Kentuckians saw that night would be almost unrecognizable to anyone from our generation, or our parents' generation:

Amazing! We loved this entry. I knew there was at least one Oz book but had no idea about other stage productions/films. Very entertaining.

wow, I didnt know about any of this!!! just shows how much knowledge ends up lost in the cracks. I totally have to rethink Oz now.