Under the Double Eagle 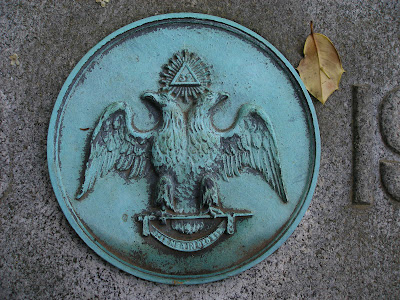 Like the Winged Disc of Horus, another ancient occult symbol often found on Kentucky's graves is the Double-headed Eagle. These two examples are in Louisville's Cave Hill. 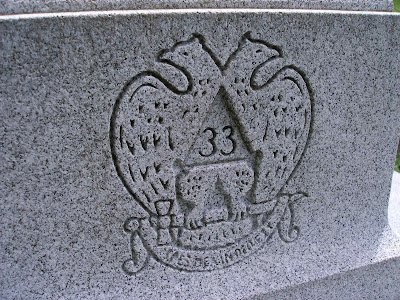 The Double-headed Eagle is most commonly associated with the Scottish Rite of Freemasonry, which is why you find it so often on gravestones. Manly P. Hall says it's an alchemical symbol of the union between the masculine and feminine principles in the individual, but as with most of his explanations to the public, there's probably much more than meets the eye.

The symbol itself predates the Scotch-Rite Masons, the earliest written reference to which is 1733. The Hittites held the symbol in great esteem, and were carving representations of it as early as two thousand years before the birth of Christ (see photo below). (Also note the resemblance to the Winged Disc symbol, with the downward pointing tail, the shield replacing the sun-disk, and the twin heads replacing the twin antennae or serpents.) 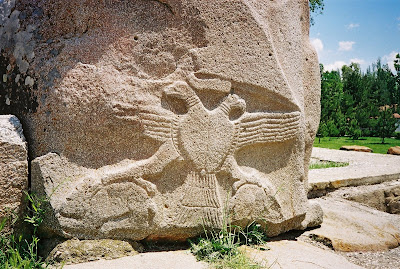 After that, the mysterious symbol turns up in all kinds of places throughout history, from the Byzantine Empire to the Holy Roman Empire to the German Confederation of 1815.

Today one can also find vestiges of this tradition in the flag of Albania, the flag of Serbia, the insignia of the Turkish Police, and in the symbology of the Greek Orthodox Church. 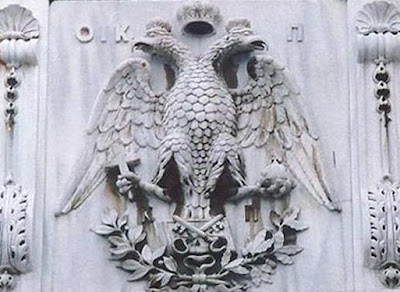 The tune "Under the Double Eagle" is a very popular instrumental in the Kentucky-based Bluegrass music genre, but most are unaware of its source. Bluegrass pickers learned it from old recordings of John Philip Sousa's version, but Sousa himself picked it up from German military bands, who in turn derived it from Josef Wagner's 1902 Unter dem Doppeladler. Wagner's tune's title referred to the Coat of Arms of the Austro-Hungarian Empire (1867), which in turn derives from the House of Habsburg (circa 1100). 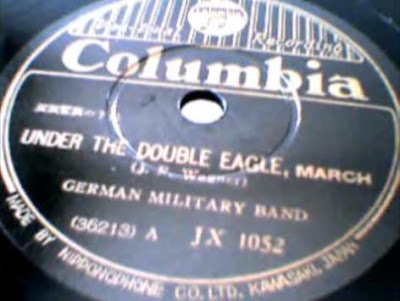 I used the image to my own devices to appear in the background as a fixture on a building in my as of yet unpublished, "Anamnestic Comics." It was to infer, oddly enough, that the character was, in a sense, "under the eagle," as in that pernicious forces were looming about him.

I learn all kinds of things here I never expected to. thanks