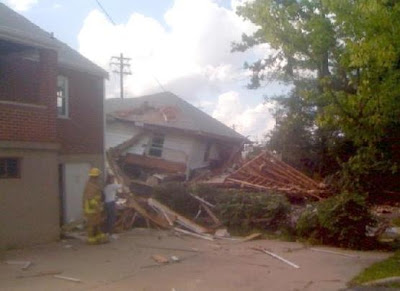 A house in Florence went kaboom on Sunday, at the corner of Dixie Highway and Main. From WHAS-TV:

(WHAS11) - Police in northern Kentucky are reviewing video that shows a vacant two-story house exploding and collapsing into a pile of debris.

A surveillance camera at a nearby business captured the explosion in Florence Sunday afternoon.

No one was hurt but the blast sent debris and glass flying in all directions and blew out windows at a nearby office.

It's suspected to be due to a natural gas leak, but no one's certain just yet. From WLWT-TV:

The wreckage of the home came to rest several feet away from its foundation, and firefighters said the home was blown about 20 feet into the air.

Two boys who were in a nearby skate park said they were nearly struck by the wreckage.

"We were right in front of that house and it blew up. The house lifted up, flames went up, debris flying everywhere, glass and wood hitting my car. It was basically like a tornado," said John Bailey.

People as far as two miles away reported hearing and feeling the explosion.

"It kind of looked fake. It was better than a movie -- our car went off the ground and it was pretty sweet, but crazy at the same time," said witness Gage Schultz.