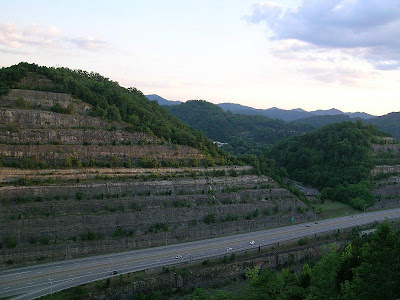 Regardless of what one may think about such massively intrusive mountain-moving alterations of the environment by mankind, the Pikeville Cut-Thru is certainly a fascinating mess. It's the second largest land-removal engineering project in the entire Western Hemisphere of the planet, ever, second only to the Panama Canal. Think on that.

Supposedly, the project helped a lot of people avoid traffic congestion and flooding of the Big Sandy River. I don't live there so I don't know. But it sure is ugly. And I can't believe they planted rows of trees along those narrow stone shelf-cuts - once they grow to a certain height, they're going to start tipping over and tumbling down into the road, mark my words.
Posted by JSH at 10:20 PM

Well, we can't have people driving OVER or AROUND these things now, can we?