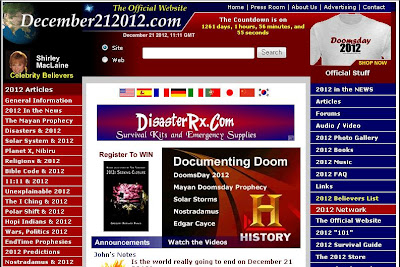 Last night WHAS Channel 11 ran a piece about 2012 which focused heavily on a website called december212012.com. The site's a virtual one-stop shop for 2012-obsessives, and just happens to be run out of Brooks, KY by a fellow named John Kehne.

So what's the whole 2012 thing about? Well, see, the Mesoamerican Long Count calendar stops abruptly at December 2012, which has been variously regarded as meaning that armageddon will ensue, that our entire universe will end, that time as we know it will cease to exist, that a new enlightened spiritual era of global consciousness will be ushered in, that the Earth will collide with a rogue planet named Nibiru, that the Earth will undergo a pole shift because of galactic alignment with the Dark Rift, or maybe all of the above. Or maybe not.

Or maybe Terence McKenna was right.
Posted by JSH at 10:05 AM

Not only did this post contain some of my very favorite celestial oddities (the waves of which are now veritably crashing Kentucky's fair 'shores'), somehow, I never drew a connection between Mayan cosmology and Time Wave Zero!