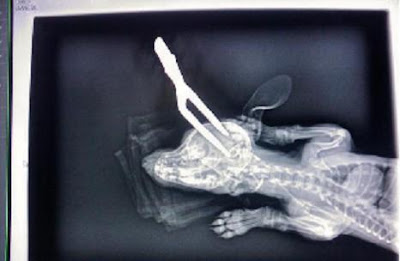 Many news outlets worldwide are picking up on this story from Manchester, KY, including CNN:

A Kentucky Chihuahua is expected to make a full recovery after a freak accident that left a large barbecue fork lodged in his head for days, according to the animal hospital where he was treated.

During a family gathering two weeks ago, 12-week-old Smokey was waiting to be fed as his owner used the fork to shoo another dog away from Smokey's food, Su Smith, vice president of Cumberland Valley Animal Hospital in London, Kentucky, wrote in an article on the hospital's Web site.

As owner Vickie Brumley of Manchester, Kentucky, waved the fork, the handle broke off and the fork end was flung through the air, embedding itself several inches into Smokey's head.

Smokey immediately ran into the woods, Smith wrote. For two days, his owner's family searched for him despite bad weather and finally came to the conclusion that he had either died of his injury or been killed by wildlife.

Brumley's brother, Hughie Wagers, was visiting his sister and sitting on the porch when Smokey came up the driveway with the fork still sticking out of his head, Smith wrote. He rushed him to the animal hospital. 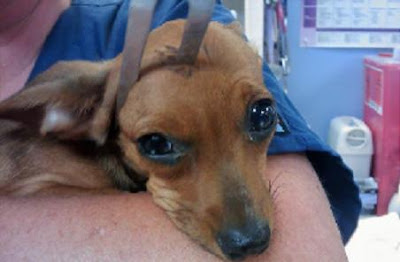 Amazingly, Smokey is doing just fine and is expected to fully recover.
Posted by JSH at 5:53 AM

Just found your blog by chance the other day. Pretty cool!