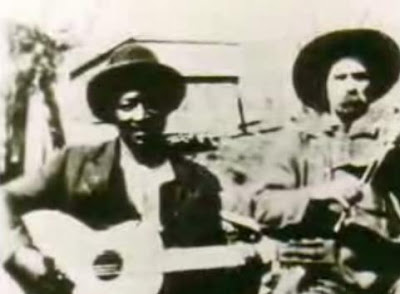 Around the turn of the last century, there was a man named Arnold Shultz who wandered the Kentucky countrysides doing odd jobs and working in the occasional coal mine, but primarily living the true rounder/hobo/traveling songster lifestyle. This is itself is enough to earn Arnold Shultz a place of great respect in my heart, but the fact of the matter is, Shultz had a powerful effect on music history and should be recognized by any student of rural blues and country.

Muhlenberg County has always been regarded as the birthplace of a certain jaunty thumbpicking guitar style, better known as "Travis-style picking", after Merle Travis, who popularized it along with Chet Atkins. But Travis didn't invent the technique, nor did locals Mose Rager nor Ike Everly (whose children would later find fame as The Everly Brothers). The source for this peculiar style was none other than our Arnold Shultz, at least according to some historians.

But Shultz's influence didn't stop there. Bill Monroe himself regarded him as a mentor, and openly admitted his stylistic debt.

This all came at a time when black music and white music were cross-pollinating each other and creating bold new material, before terms like "blues" and "bluegrass" were firmly pinned down. Kentucky's fertile musical soil played a crucial role in this merger, as documented on CD by Yazoo Records on The Music of Kentucky Volume 1 and Volume 2, the Kentucky Mountain Music box set, and the Before the Blues series.

According to a great article about Shultz by Kathy and Don Thomason on bgdailynews.com, "Shultz died on April 14, 1931, officially of heart disease but in the regional lore he either died of “bad” whiskey or poison administered by jealous white musicians." He was buried in Morgantown in Boone County.
Posted by JSH at 9:11 AM