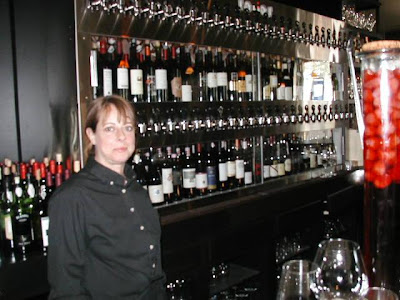 You probably already knew the largest Cruvinet in the state can be found in Louisville's L&N Wine Bar & Bistro, at the corner of Mellwood and Story, right?

It's one of these things, in the picture, see. It's a giant thingamabob that has oodles of wine bottles attached to it, see. The Cruvinet Systems website says: "A Cruvinet temperature controlled system keeps wines as fresh as the momentthey are uncorked for up to six weeks, eliminating spoilage and waste. This system has revolutionized wine-by-the-glass sales and made wine bars possible. Cruvinet is the original wine preserving and dispensing system, used widely by international wine experts for effectively preserving, dispensing and merchandising fine varietal wines by the glass."

There seems to be something about Cruvinets that defy statistics. One website says L&N Wine Bar's holds 50 bottles, but another says 54, and yet another says it's "60+". I tried to research even bigger Cruvinets online and found a site that says Ristorante Panorama in PA has "the largest Cruvinet in the country". Then I found one that upped the ante even more and claims Ristorante Panorama's is the largest in the world.

Finally, I found a site that said that actually, Louisville's L&N Wine Bar has, in fact, the largest Cruvinet in the country!

Just goes to show you can't believe everything you read on the net. (Except my blogs, of course!) I chose to split the difference and accept that their Cruvinet is largest in the state, but need more convincing that it's biggest in the entire nation.
Posted by JSH at 11:44 PM

Reserve GR in Grand Rapids, opening in September, has a 102 bottle cruvinet system