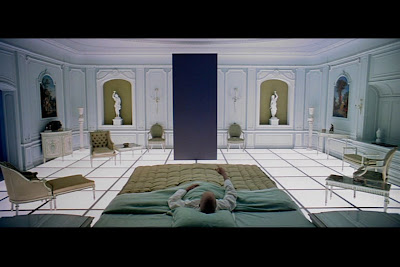 The indefatigable anomaly-watcher William R. Corliss, in the Jan-Feb 1997 edition of his newsletter Science Frontiers, tells of a fascinating instance of life imitating art, Kubrick-style:

T.M. Olsen has investigated a bizarre observation from Kentucky. The date was September 28, 1996.

"Vance C. Johns, a secondary-school horticulturist, lives a rural area east of Louisville. Sometime between midnight and 1:30 AM, he got up to use the bathroom and saw a strange object outside his bedroom window. His wife, Florence, keeps the drapes open on the center of three picture windows, and he immediately opened the other drapes for a better look. The open view through the windows, which face south, is of a grass lawn sloping to a curved driveway. This 0.8-hectare cleared area is devoid of trees and other objects. Two large, automatic floodlights illuminate the ground around the entire house, and under a full moon, it was bright enough to read a book. The night was clear and about 10°C with no noticeable wind. No aircraft were in the area.

"At a distance of 14 m (measured after the incident) from his vantage at the bedroom window, there appeared on the lawn an object resembling a common railroad cross tie but oriented in a vertical position, with one end on the ground. It was matte black, 2 1/2 - 2 3/4 m high and 30- 35 cm wide. The sides were smooth with a well-defined corner joining the west and north sides. The view of the top showed the west and north top edges were also welldefined. The object appeared solid but did not cast a shadow.

"As Johns watched in astonishment, the object began moving toward the front porch. He could clearly see two sides of it as it approached. As the top passed under the eaves, the bottom bent backwards over the bushes which border the 71-cm high porch, in the manner of a man's leg bending at the knee, forming an obtuse angle. At this point, he lost sight of it, grabbed his .38 handgun, and quickly went to the windows
on the other three sides of the house, hoping to again see the object in the ample illumination, but without success. Although the object had moved very slowly from its original position, total viewing time was less than ten seconds. There was no sound at any time during the sighting."

When Johns reported the above incident, he was advised to see the movie 2001: A Space Odyssey, in which an eerie monolith is a key player. Johns did so and commented that said monolith "blew his mind." It was just what he had seen, except that it was wider and shorter.

After I happened upon this story last night, my first thought was to track down Mr. Johns and press him for further information past the sketchy details provided in this account. Unfortunately, it turns out Mr. Johns passed away in September 2003, and with that the door has seemingly closed on this mysterious incident.
Posted by JSH at 11:45 AM

The biblical account of a 'pillar of cloud by day and a pillar of fire by night' which led the Hebrew exodus out of Egypt (and into the Sinai for a generation) always brought to my mind Arthur C. Clarke's monolith.

Perhaps these objects have been in the global consciousness (as Clarke's & Kubrick's portrayals might suggest)as long as there has been consciousness--and on or near the Earth even longer.

I was made privy to this incident some time ago. I think I read about it in the CJ or something? I was acquainted to Mr. Johns when i attended the Horticulture program at Kentucky Tech out at Sawyer Park ( I don't know if it is still out there). At that time some of the people in my class were helping 'Daddy V' build his house. This was about 6 years before that incident around 90-91. From what I know of him he seemed like a pretty solid guy though I only knew him in passing. On one or two random occasions I've gone back there to see if I could discern his home as all I know is which road it is supposed to be. After we want on a field trip to the Farm Machinery show he rode some of us back to the property before he started building but I can't for the life of me remember the specific location. It was a good number of years after that I though to go back and look for it.