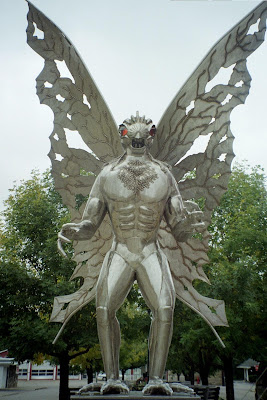 I just found out that John A. Keel, best known to the masses as the guy behind the whole Mothman mythos, left this mortal coil on July 3rd and has moved on to his next level of research. Shine on, you crazy synthetic cubic zirconia.

Wikipedia quotes Keel as saying he is not a ufologist, then goes on to call him a ufologist. Typical. But they do give some good background on his pre-Mothman doings:

John Keel's first published story was in a magician's magazine at the age of 12. He later moved to Greenwich Village and wrote for various magazines. His first published book was Jadoo in 1957 that was serialised in a men's adventure magazine. The book is his account of his travels to India to investigate the alleged activities of fakirs and holy men who perform the Indian rope trick and who survive being buried alive.

Influenced by writers such as Charles Fort, Ivan Sanderson, and Aimé Michel, in early 1966, John Keel commenced a full-time investigation of UFOs and paranormal phenomena. Over a four-year period, Keel interviewed thousands of people in over twenty U.S. states. More than 2,000 books were reviewed in the course of this investigation, in addition to thousands of magazines, newsletters, and newspapers. Keel also subscribed to several newspaper-clipping services, which often generated up to 150 clippings for a single day during the 1966 and 1967 UFO "wave". Keel wrote for several magazines including Saga with one 1967 article, UFO Agents of Terror, referring to the Men in Black.