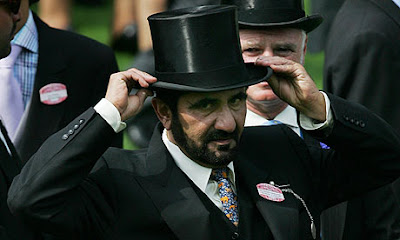 How often do you get to see a major world leader ride a horse in Kentucky? Sheikh Mohammed bin Rashid Al Maktoum, ruler of Dubai (and also Prime Minister of the United Arab Emirates), will be heading a team of riders in the October 14 Kentucky Cup Endurance race. The event is an official test for the World Equestrian Games to be held in Lexington, KY in 2010. 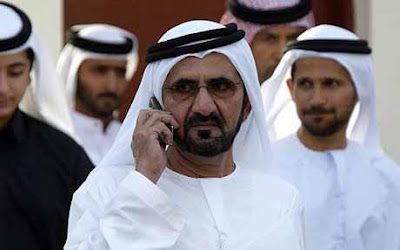 Sheikh Mohammed became Crown Prince of Dubai in 1995, and spent the next decade as the nation's de facto leader. He officially became the Ruler of Dubai on January 4, 2006.

He owns 99.67 percent of Dubai Holding, which in turn owns and/or controls Dubai Knowledge Village, The Tiger Woods Dubai Golf Resort, Six Flags Dubailand, the Jumeirah Hotels, Dubai Group Financial, and much more. He has also overseen the development of projects like the artifical Palm Islands and the luxury Burj Al Arab, which by some determinations is the world's second tallest hotel. 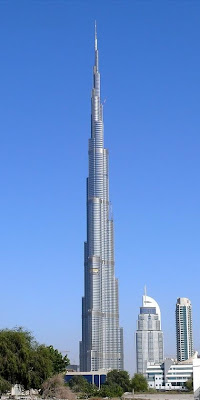 He is also promoting the construction of Burj Khalifa (pictured above), which is now the tallest free-standing structure in the world. When it is completed before year's end, it will officially become the world's tallest building at 818 meters tall. (By comparison, the Empire State Building is 449 meters, Louisville's Aegon Tower is 167 meters, Lexington's Financial Center is 125 meters, and The Ascent in Covington is 89 meters.)

Kentucky rocks more and more globally all the time! Huzzah!

At first glance of this guy in a top hat, I totally thought it was an Abraham Lincoln impersonator.

Nicosia, I thought the same thing! That was a photo of him at some gala event in Scotland but I couldn't resist using it since he looked so old-money old-school old-Louisville Kentuckian in it.

Melissa, right you are.