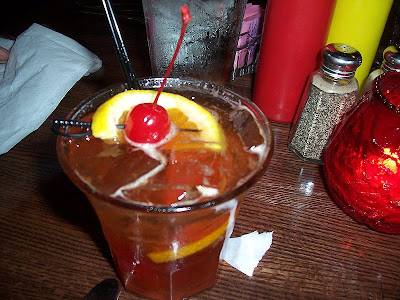 Calling all Transylvania Gentlemen: next time you want a sweet-n-fruity drink that is also somehow simultaneously radiating he-man gravitas, try that Kentucky creation known as an Old Fashioned. (You know, the one Cole Porter sings about in "Make It Another Old Fashioned, Please").

As Drinkboy says, "The Old Fashioned is an old drink, a very old drink". I like to imagine William S. Burroughs saying this, in exactly the same way he says in the Naked Lunch film, "America is not a young country. It is old... and dirty... and evil. Before the settlers, before the Indians, the evil was there, waiting."

Supposedly, the first drink ever to be called a 'cocktail' was the Old Fashioned, and the Old Fashioned was supposedly invented in Louisville at the Pendennis Club. Supposedly. It's probably as specious a factoid as Kaelin's claim to have invented the cheeseburger, but what the heck, that's their story and they're stickin' to it. It sounds good to me and I ain't gonna squawk.

The aforementioned Drinkboy cites a book called Old Waldorf Bar Days by Albert Stevens Crockett, in which it states that the Old Fashioned was invented by Col. James E. Pepper from Kentucky. Pepper was a member of the Pendennis Club, and the book says he introduced the drink to NYC by teaching the bartender at the Waldorf-Astoria how to make it. I did a little digging and sure enough, I tracked down numerous references in the New York Times to Col. Pepper regaling high society pals in New York. 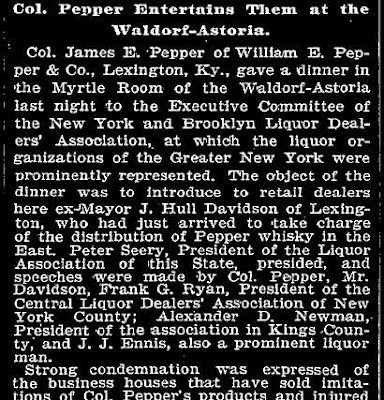 The earliest example of a recipe known is in "Modern American Drinks" (1895) by George J. Kappeler. It says simply:

"Dissolve a small lump of sugar with a little water in a whiskey-glass; add two dashes Angostura bitters, a small piece ice, a piece lemon-peel, one jigger whiskey. Mix with small bar-spoon and serve, leaving spoon in glass."

The version in Irwin S. Cobb's recipe book is a bit more complex:

"One-half piece Sugar, 2 dashes Angostura Bitters, 11/2 jiggers Paul Jones or Four Roses Whiskey, 1 slice Orange, 1 slice Lemon, 1 slice Pineapple, 2 dashes Curacao. Muddle sugar and bitters with pestle. Add cube of ice, whiskey and Curacao and decorate with fruit. This cocktail was created at the Pendennis Club in Louisville in honor of a famous old-fashioned Kentucky Colnel. I claim it was worthy of him."

But it's David Embury, in his 1948 The Fine Art of Mixing Drinks, that gives the most in-depth rundown:

"Pour into each glass 1 to 2 teaspoonfuls simple syrup and add 1 to 3 dashes Angostura. Stir with a spoon to blend the bitters with the syrup. Add about 1 oz. whisky and stir again. Add 2 large cubes of ice, cracked but not crushed (see page 100). Fill glass to within about 3/8" of top with whisky and stir again. Add a twist of lemon and drop peel in the glass. Decorate with a maraschino cherry on a spear. Serve with short stir rod or Old-Fashioned spoon.

I have been intentionally somewhat indefinite about the quantity of sugar and bitters for two reasons. First, you should experiment and determine for yourself just how sweet you like the drink and just how much of the bitters flavor suits you best. Second, I have stated the recipe in terms of filling your Old-Fashioned glasses to within about 3/8" of the top and I do not know the exact size of your glasses. Tastes vary somewhat, of course, but I have found that most people like about 1 teaspoonful of sugar and 1 to 2 dashes of Angostura to each 2 ounces of whisky.

Also, please note that I have suggested only a cherry and a bit of lemon peel for decorations. You will frequently find Old-Fashioneds served with lemon, orange, cherry, and pineapple. The bartenders' manuals of the Gay Nineties were replete with illustrations of cocktails, Sours, Crustas, Smashes, Cobblers, and other drinks decorated with all the above fruits together with strawberries, grapes, raspberries, etc., according to the available supply and the fancy of the writer. At the other extreme stand those who contemptuously refer to any cocktail decoration as "the garbage." My own opinion is that fruit flavors and liquors blend exquisitely and that, for a midafternoon or an evening drink, and Old-Fashioned is greatly improved in its over-all appeal by the judicious addition of a few fruits. Fruits, however, properly belong at the end of a dinner rather than at the beginning. Accordingly, when serving Old-Fashioneds as an aperitif, I recommend using only the lemon peel with no fruit at all, or at the most, a cherry or a slice of orange.

Note that in the Old-Fashioned the only modifying agents used are the bitters and sugar. The reaction time of this cocktail is slower than that of a Martini both because of its sugar content and because the whisky is slower than gin. Don't be deceived by this. It is not a lighter drink than the Martini; it is stronger. Its action is merely delayed."

So what's the difference between an Old Fashioned and a Manhattan? Well, honestly, not much, except for the sugar, the vermouth, and the fact that most bartenders today leave the bitters out of a Manhattan. Alcoholic scholars still debate whether the cherry in an Old Fashioned should be muddled or not muddled. (I say: when in doubt, muddle.)
Posted by JSH at 1:35 AM

Here, Here! I enjoy this drink and have "Taught" many bartenders the art of making it. I was introduced to it in the early eighties as a 19 year old. An elderly gentleman who enjoyed loosing sacks of pennies playing poker, showed a friend and I how to make them. He choose to muddle the cherry and add a slice of orange, Seagrams was his HAMMER of choice.

I would love to get the old Golden Horseshoe's recipe. I have always heard they made the best.