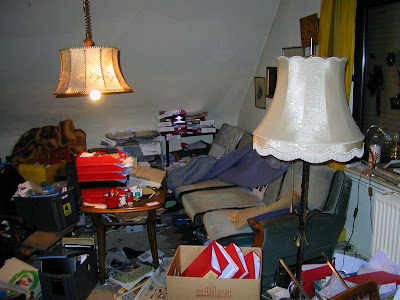 Hey kids, have you heard about the latest in a long line of contrived and bogus trendy social maladies? It's called "Hoarding". All of a sudden, the mere act of having lots of stuff is now being demonized and labeled as a mental illness. Seriously. Not making this up.

There's apparently a TV show about it on A&E - it's called Hoarders, cleverly enough. I haven't watched it and don't plan to, but I hear-tell that one of the people featured on the show is a Kentuckian. Their website describes the program as "a fascinating look inside the lives of two different people whose inability to part with their belongings is so out of control that they are on the verge of a personal crisis".

It was bad enough when "reality makeover shows" started proliferating on TV, where some gang of condescending creeps tell gullible people to throw away their clothes and belongings and get all new stuff whether they want to or not. Now the makeover police are telling you that if you don't go along with the Feng Shui gestapo, you just might be in need of psychiatric help. 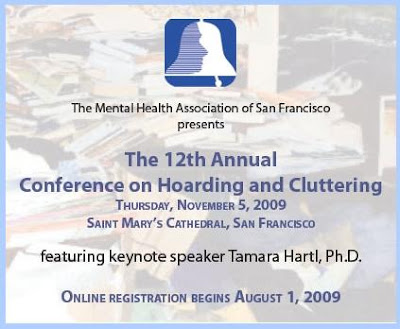 We already have OCD - Obsessive-Compulsive Disorder - which can be attached to just about any concept you can dream up, including hoarding. Collecting too much crap you don't even need can certainly be a form of OCD, but hell, the same could be said for watching too much Beverly Hills 90201 or eating too many Fudge Stripe cookies. Or just plain biting your nails. Or, you know, being a collector of comic books, baseball cards or antiques. Or anything else that humans do habitually, chronically, repeatedly. Even people who fornicate a lot, like my good friend David Duchovny, are now sent to 'sex addiction clinics'.

Being human is not a syndrome. Nor is it a disorder. Anyone who tells you differently is not your friend. They are your enemy. If you are being harassed by anyone using this fake "Hoarding" hysteria against you, call me. I got yer back. 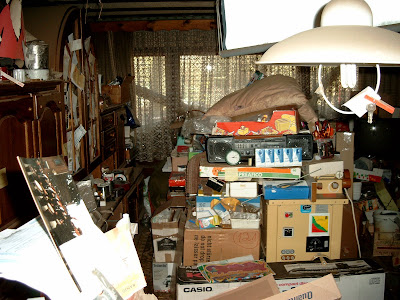 To be sure, some people really do have severe problems and issues with hoarding. There are some people who have too much stuff, and who actually want to get rid of it, but can't because they're bogged down by mental blocks that won't let them go through the necessary series of steps to get it done. But we all have certain mental blocks about some things at some junctures. And there definitely are some people who have too many pets and just aren't taking proper care of them.

PETA-style animal rights activists love to lump the newly-coined concept of "Animal Hoarding" in with general all-purpose Hoarding - not because mental health is so vital an issue to them, but because it gives them an added "mental illness" weapon to wield against puppy mills and the factory-farm sources of their favorite scapegoat, Kentucky Fried Chicken. 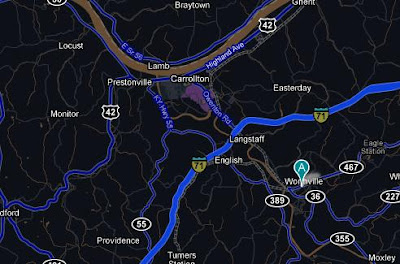 Some of these "animal hoarders" are indeed reprehensible, such as a recent case in Worthville:

More than 200 animals are now safe after a raid in Worthville, which is just outside of Carrollton. Recovery continued Sunday for 240 animals rescued after the raid on Sept. 30. The rescues came after police received several complaints about a stench, and small animals running free at a cemetery.

"When authorities went to check it out they found a pretty horrific finding," said Carroll County Judge Executive Harold "Shorty" Tomlinson. Inside a nearby garage, authorities discovered more than 120 chickens, 48 ducks, 6 dogs, 30 rabbits, 1 quail, 1 peacock and 2 turkeys. Some of the animals were so sick that veterinarians stayed until midnight to care for them the first night.

Since rescue efforts began Sept., 37 rescued animals have grown too sick to save. Most of the sick suffered from respiratory problems and infections. "There were several that had to be euthanized because of their condition," said Michele Shockley, a first responder with United Rescues of Kentucky 911, a rescue group based in Frankfort.

Officials tell us the animals were up for sale by Donnie Cannon, who has been cited for cruelty to animals in this case. So far, Cannon has not been arrested according to Judge Executive Harold Tomlinson.

Problem is, the anti-hoarding nuts are also going after the so-called "Crazy Cat Ladies" who have too many cats to suit someone else's sense of seemliness. The point where someone has too many pets is, and always has been, a case-by-case judgment call. It's like the Monkeysphere Problem in reverse - what is the number of pets that is officially too much, and where is this line drawn? Doesn't the number depend on many variables like the square footage you have to keep these animals in, and how to what extent the quantity of critters deters you from being able to care for and feed them properly?

"Its the new buzzword in the media for animal abuse, "animal hoarders", sometimes called "animal collectors", and these terms are currently being written into prospective animal limit legislation across the US. "Animal hoarding" is being labelled a mental illness, often with a reference to the DSM-IV which is the Diagnostic Standards Manual used by certified Psychologists and Psychiatrists across North America. There's a problem though.

Animal hoarding is not a recognized diagnosable mental illness with the DSM-IV. Neither is Hoarding, which is the response normally provided when the Animal Hoarding claim is debunked...

Hoarding does not make one OCD, but OCD can make one hoard. Claiming a person is a hoarder of any kind without the accompanying, medical diagnosis of OCD is like claiming someone is schizophrenic for talking to themselves looking at the shelves in the grocery store aisle."

Saunders has also been closely following Louisville's crackpot animal care and animal control ordinances, which have recently been ruled unconstitutional. 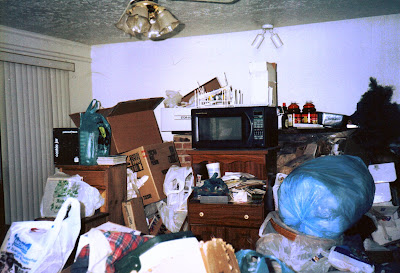 Anyway, dear reader, the next time someone makes you feel like there's something wrong with you just because you choose to have a lot of possessions, and live like a slob amongst the clutter of your klediments, don't back down. Call their patriotism into question.

As an American, you have a God-given right to surround yourself with boxes of flea market items that you bought by the bagful in 1994 and haven't looked at since.

You have a right to buy more Christmas cards at the dollar store in quantities that outnumber the amount of friends you have to send them to, and then end up sending none of them.

You have a right to desire to own every comic book in Overstreet's Price Guide, even the ones you couldn't care less about reading. Even if it means every room of your home is filled with stacks of those long white comic-book-collection storage boxes, and your girlfriend leaves you because she's sick of the breakfast nook being taken over by stacks of boxes of your 'trading copies' of lesser-condition duplicates of complete runs of Bob Hope, Fox & Crow, Scooter, Binky, Doc Savage and Magnus, Robot Fighter.

You have a right to adopt "just in case I might need it someday" as your rationale for owning practically any object in virtually any quantity.

You have a right to spend a fortune on storage units you haven't opened in years.

You have a right to possess so many boxes of collectible toys that you no longer remember what color your carpet was.

You have a right to be so sentimental about possessions that you save objects from 40 years ago whose significance you've long since forgotten, but you keep them anyway, because you know the younger you would have wanted it that way.

The great Lux Interior once said, "Life is short, and full of stuff." Stuff is good. Hoard it. Don't believe the hype.
Posted by JSH at 7:46 PM

I'm grateful that my grandparents hoarded letters and old photos - well, actually these items occupy fairly small spaces in comparison to my 30+ year accumulation, but, to continue my argument - there is great value in documents and photos over 30 years old and even 120 years old and beyond - you can learn much history, facts about the past and your family - plus it is interesting.

If "they" think hoarding is a disease, "they" need to wake up and see the opposite side as being equally insidious, if not more so: those who throw out too much, to the point of tossing out "the baby with the bathwater". There are too many people out there who are the wrong ones for rare and valuable objects to fall into their hands. We are losing much history much faster now due to this illness that will not be recognized until it's too late: when we've lost too many items of antiquity that cannot be replaced.