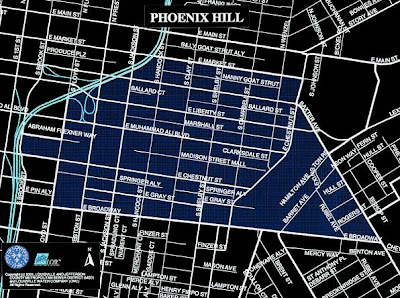 Most Louisvillians probably don't think of the downtown "Nanny Goat Strut" alley, the corner of Broadway and Floyd, and the corner of Barret and Rubel as all being part of the same neighborhood. But in fact, they are. Says Wikipedia of the Phoenix Hill area:

Its boundaries are Market Street to the north, Preston Street to the west, Broadway to the south, and Baxter Avenue to the east. The area was originally known as Preston's Enlargement, part of the land granted to Colonel William Preston in 1774. The area was annexed by Louisville in 1827, known at the time as Uptown, and was densely populated by the time of the Civil War. Some of the Bloody Monday riots occurred in Phoenix Hill near the St. Martin of Tours church.

According to John E. Kleber's Encyclopedia of Louisville, The Phoenix Hill Brewery, built in 1865, was the main center of attraction in the area and John Philip Sousa often performed here. Sadly, it closed in 1919 due to prohibition and subsequent land-alteration destroyed much of the actual hill for which the area is named.

While "Preston's Enlargement" was a pretty great name, I'm most curious what motivated someone to change the area's monicker to Phoenix Hill, and when exactly it happened. A Phoenix, of course, is an ancient mythological firebird originating with the Phoenicians and resonating into later Egyptian and Greek cultures. The neighborhood's signage clearly and boldly acknowledges the connection. 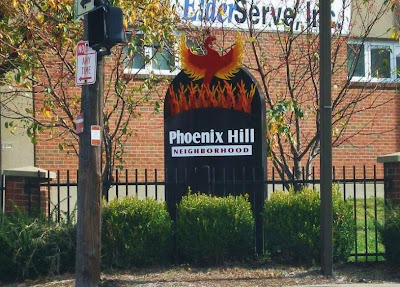 The village's most famous namesake, Phoenix Hill Tavern, is just at the very farthest edge of the area's boundaries, at the corner of Broadway and Baxter. (In actual practice, of course, boundaries of these neighborhoods have always been vague, sketchy, wobbly, and shifting. Most people just refer to everything between Feeder's Supply and Preston Arts Center as "The Highlands" anyway.)
Posted by JSH at 7:16 PM