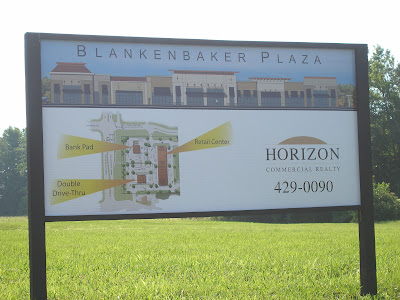 Back in the Spring, I wrote about an abandoned tomato farm that had some cool old remnants of its glory days hidden amongst the foliage, near the border of Jeffersontown and Middletown.

Well, recently these signs have appeared in front. Looks like somebody's got big plans to build a strip-mall here, including a new bank. (Oddly, another new bank is currently being built - and is almost finished - a block down the street, about 10 seconds away.)

This comes not long after a similar sign popped up not too far away, for a similar planned retail cluster which will demolish a quaint corner of older homes.

Don't we already have enough empty and unwanted shopping centers?
Posted by JSH at 9:50 AM

I know there are plaenty of brand ne empty strip mall stores here in Radcliff as well! No more!