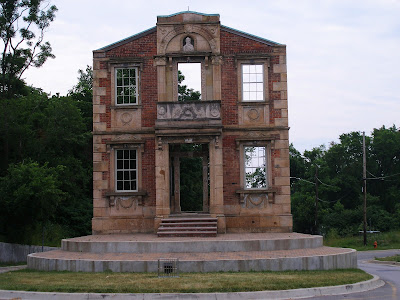 This is all that remains of the historic Heigold House in Butchertown, KY. The Heigold House was, in the 19th century, only one of many luxurious homes alongside this part of River Road, and the general area was known as "The Point". 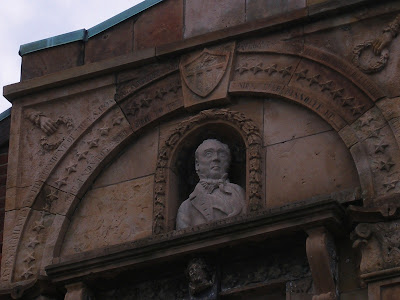 In those days, this area was populated largely by wealthy French-speaking Cajuns from New Orleans who all chose to migrate here (not sure why). The Wikipedia has this to say:

Contemporary Louisville leaders of the time wanted the entire area depopulated and replaced with a park called Point Park Project, which was done to the extreme northern part of the area, now called Thruston Park. This remained the preferred urban public park throughout the 40's and 50's. The park was severely disrupted by the construction of I-64 in the early 60's and by the 80's, it was in a neglected and dismal state. The Harbor remained until it was closed by the city in 2005.

Today the only remaining structures are the decorated front facade of the Heigold House which was moved to its present location from the area of Frankfort Ave. and Padgett House, the last remaining of the riverfront mansions along Fulton St. Both are listed on the National Register of Historic Places. The Heigold facade has been placed in a roundabout on Frankfort Ave. near River Road, while the fate of the historic Padgett House remains uncertain. 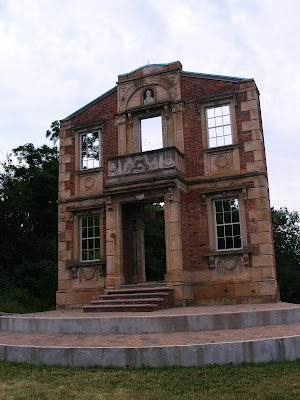 Do you know of any pictures of the house when it was intact?

None online that I know of, but I'm pretty sure the Filson Club has some in their archives.