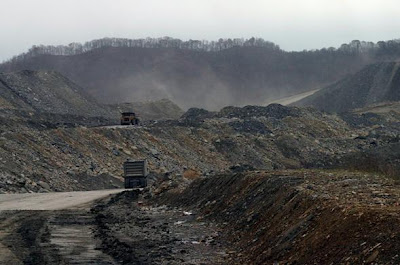 There's a recent article in the Lexington Herald-Leader about a puzzling reversal - or what seems to be one - in Obama's policy on strip-mining:

The celebration was short for the Obama administration's expected crackdown on devastating coal-mining practices in Kentucky and West Virginia.

Back in March, the applause and good press rolled in.

A retooled Environmental Protection Agency, under administrator Lisa Jackson, announced that it was formally questioning a couple of mountaintop-removal permit applications and would scrutinize others for compliance with the Clean Water Act and other federal laws.

With considerably less fanfare, the EPA last month quietly informed a congressman from West Virginia that it had given the green light to 42 permit applications while raising concerns about six others in the Corps of Engineers' Huntington district.

There hasn't been time for a thorough review of 42 mining permits, so we can only assume that the administration caved to pressure from coal interests.

That assumption is confirmed by the Los Angeles Times which reports that there was a "series of White House meetings with coal companies and advocates," including U.S. Rep. Nick Rahall, D-West Virginia, and West Virginia's Democratic Gov. Joe Manchin.

I'm happy to hear it. The coal industry is Eastern Kentucky's last lifeline. Without it, that entire region of the state would become almost deserted as people, even entire families, pack up and move elsewhere.