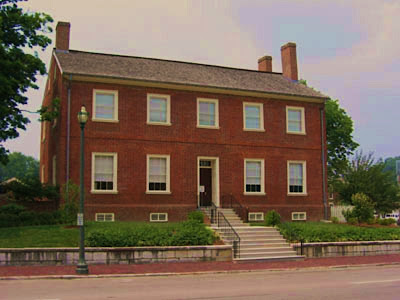 The Old Governor's Mansion in Frankfort, historically the official residence of the Lieutenant Governor of Kentucky, has been empty since Steve Henry vacated it in 2003. Subsequent Lieutenant Governors have chosen to live elsewhere to be closer to their hometowns.

The Kentucky Historical Society has since taken it over, and have completed renovations for turning it into a guest house. The renovation project was spearheaded by first lady Jane Beshear, along with former first ladies Phyllis George Brown, Judy Patton, and Libby Jones. Former Governor Martha Layne Collins has also been active in the process.

But whoever stays at this guest house may get more than they bargained for. As with many old Frankfort buildings, numerous ghost legends have been attached to the Old Governor's Mansion in the two centuries since it was built.

According to the Frankfort State-Journal:

Stephen Collins, son of former Gov. Martha Layne Collins, said according to legend, the Old Governor's Mansion is haunted. Collins is also chairman of the Historic Properties Advisory Commission and its members have discussed the possibility of using the mansion as a guesthouse.

Collins lived in the mansion with his mother while she was lieutenant governor between 1979 and 1983. According to legend, Margaret Robinson Robertson, the mother-in-law of Gov. Robert Letcher who held office from 1840-1844, still haunts the mansion.

Robertson moved in with her son-in-law after she was injured in a buggy accident that also killed her husband. She lived in the dining room on the first floor and Collins said she pledged to return after Letcher left office in 1844.

"They say if ever evil is about to befall the walls of the mansion, the ghost of Mrs. Robertson will return and the evil spirits will disappear," Collins said.

Gov. Christopher Greenup, who served from 1804-1808, held the first inaugural ball for his wife, Mary Catherine Pope Greenup. She died in 1807, and according to legend, her ghost walks the halls at night carrying a candle, Collins said.