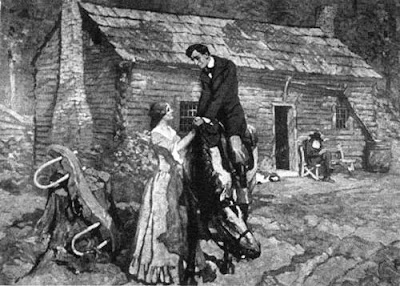 Born in Henderson, KY, the legendary Ann Rutledge supposedly had a romantic relationship with the young Abraham Lincoln. As the legend has it, Ann died at 22 from Typhoid Fever, and Abe went into a deep depression over her passing. This was once generally held as factual by historians, but in recent years some are starting to reassess the story.

In his book Lincoln the President, James G. Randall expresses doubts about their love affair in the chapter "Sifting the Ann Rutledge Evidence".

At the Abbeville Institute conference on "Re-Thinking Lincoln", maverick historian Clyde Wilson mentioned Ann in the course of his revisionist debunking frenzy:

"At times his wife drove him from the house in a rage, and she ended up in an insane asylum suffering mental and physical deterioration that have been described as resembling advanced syphilis. On the record, Lincoln was no poster boy for son, husband, or father. According to the fable Lincoln suffered greatly from the tragic early death of his first love. There is no evidence whatsoever for the Ann Rutledge story. However, we do know that Lincoln cold-bloodedly jilted one lady when he found another of higher status. Even then, he stood up the new fiance at the altar the first time."

Then again, the Abbeville Institute's motives in trashing Lincoln are more than a little suspicious. 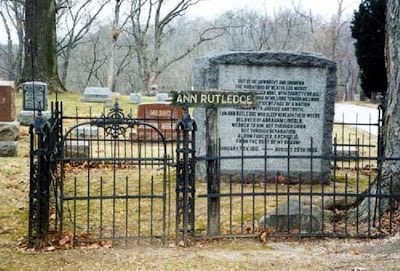 But according to Wikipedia:

"After Lincoln's assassination in 1865, his friend and law partner William Herndon first revealed the story of the supposed romance between Rutledge and Lincoln, much to Mary Todd Lincoln's anger and dismay. Abraham Lincoln's surviving son Robert Todd Lincoln was also upset by this claim. Most of Herndon's sources came from interviews with Lincoln's early friends in New Salem and Ann's relatives. The story was later repeated by Herndon in several lectures and books."

Ann's grave has a peculiar bit of free verse inscribed on it, which reads in part:

I am Ann Rutledge who sleeps beneath these weeds

Wedded not to him, not through union

I HAVE BEEN A LINCOLN SCHOLAR FOR 53 YEARS AND I TRULY BELIEVE THAT ABRAHAM LINCOLN WAS ENGAGED TO ANN RUTLETGE. WHEN SHE DIED ON AUGUST 25,1835 PART OF ABE WENT INTO THE GRAVE WITH ANN. ABRAHAM WAS THE GREATEST AMERICAN WHO EVER LIVED!PERIOD!!!!!!!

Those who revere the Lincoln lies have two problems. First, they must approve his unconstitutional grasps for power that resulted in the deaths of one in four men of the Southern States who were of war-making age and the deaths of tens of thousands of women children and the elderly, and the maiming of 65% of the remainder of the male population. Most of this slimmy lot believe that the United States only mistake was that they did not kill more Southerners than they did. Second, the mythologisers simply deny the hard facts of the Lincoln administration. Politicians lied as easily in the 1860's as they do today. Such people should never be granted any level of political power and authority and are to be feared when they coldly approve of this past genocide conducted against the women, children and elderly of the Southern States. The Lincoln lies resulted from the bloodbath that followed in the wake of the Lincoln administration. Families did not want to believe that their sons died as the result of an unconstitutional and unrighteous political maneuver. Republicans sought to use the slavery issue, late in the war,to cover their misjudgement. Dr. Clyde N. Wilson does not have to explain away the warts of history by saying they don't exist. The study of history is for mature adults who can face difficult facts without damaging their integrity. The U.S. Federal Fecords of the Department of War state that 80% of the warfare directed against the Confederate States was directed against the Southern civilian population in order to demoralise Southern men so that they would cease resistance to the invasion of their States by the U.S. military forces. Such thinking is demonic and without a trace of civilized morals. According to the Pentagon the USA has conducted another 215 wars against foreign sovereign nations since Lincolns war. It is in the spirit and interest of the USA ruling class to do these things, and it is my "belief, that so long as the USA has this level of military force that it will continue to use it against foreign nations in the future and against its own people again if it feels it is in their interest to do so.