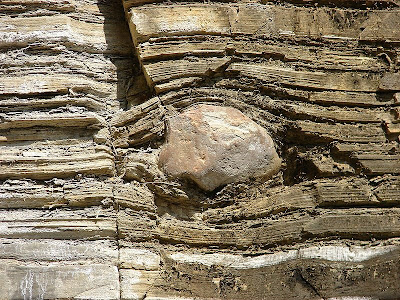 Though Glacial Dropstones are a phenonema found all around the world, Kentucky is one of several states especially good for finding them - this is partially because it has a high quotient of roadcuts through mountains that remain largely untouched since their creation. (For this same reason, Kentucky's a great place for fossil-hunting, too. I've gathered many a trilobite from the rocky roadcuts at the side of Kentucky highways.)

What are dropstones? They're rocks - ranging from boulders to pebbles - that occupy an anomalous place in the geologic record. A few are the results of volcanic eruption, but the vast majority of them got there because they were carried there by glaciers in prehistory. These dropstones occur all over the planet, indicating that the entire world was once encased in ice.

According to Frank R. Ettensohn's recent scientific report called Kentucky Dropstones and the Case for Late Devonian Alpine Glaciation in the Appalachian Basin (USA) with Implications for Appalachian Tectonics and Black-Shale Sedimentation:

A nearly three-ton, granitic boulder was found embedded within uppermost parts of the Upper Devonian (Famennian; praesulcata Zone) Cleveland Shale Member of the Ohio Shale in Rowan County, northeastern Kentucky, and most recently, an in-situ boulder was noted from the subsurface Bedford Shale in eastern Kentucky. Other, anomalous, igneous and metamorphic boulders have been found near Cleveland exposures in the area, but none were in situ, prompting previous workers to ascribe their origins to ice-rafting in proposed, Pleistocene proglacial lakes, accompanying glaciation to the north. The in-situ nature of the new find, dated age of the boulder lithology (470 Ma), as well as compositional aspects of this and other likely dropstone boulders, strongly suggest Appalachian origins.

These dropstones occur all over the planet, indicating that the entire world was once encased in ice.


Not exactly accurate. There is some evidence for a "Snowball Earth" senario, but that evidence is related to a Proterozoic(~700ma) glaciation event. Dr. Ettensohn's research supplements existing data that indicates a mid Paleozoic glaciation(Dev.). There is no data to suggest that the Devonian glaciation encompassed the planet in ice; merely that the dropstones are evidence of alpine glaciation in the proto-Appalachian Mnt.

Too, if interested, the Garrard Siltstone of Central Kentucky presents indirect evidence for the Late Ordovician glaciation that occured in Gondwana.