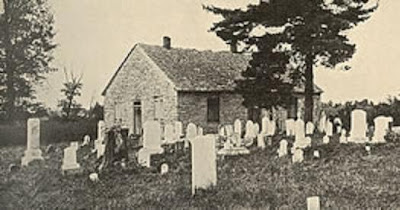 Just noticed this news story of yet another instance of cemetery vandalization a couple of weeks ago. This time it's in Jessamine County, at the Ebenezer Cemetery - A historic site with many Revolutionary War and Civil War graves. According to the story:

More than a dozen headstones were knocked over, vandalized, and destroyed over the weekend.

Jeff Smith says it's not what he ever wanted to see.

"It kinda hurts my feelings someone would come out here and destroy things. It's disgusting", says Smith.

Smith says not only did people destroy the headstones of people he knows, they also broke into the church.

"They used a cinder block trying to break the door down. When that didn't work they tried to kick the door in", says Smith.

In fact, whoever was responsible left their footprint on the door of the church doors. Smith says within the last month they have recently done other damage around the cemetery.

"A lot of trash and beer bottles and things like that", says Smith.

However, this time around it hit Jeff Smith hard. That's because he knows a part of history is now damaged.

Other recent cemetery desecrations have occurred here and here and possibly here.
Posted by JSH at 2:09 PM