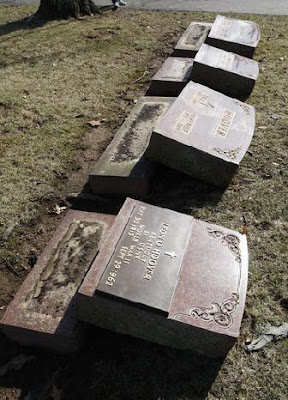 This past Tuesday night, unknown vandals, continuing the rash of cemetery desecration that's been going on around the state lately, knocked over 152 headstones in Versailles Cemetery. This is the biggest single instance of vandalism to a cemetery that I've ever heard of, in all my years of gravewatching.

According to the Lexington Herald-Leader:

Versailles police continue to seek clues about those responsible, and have offered a $2,000 reward for information leading to their arrest and conviction. Felony charges are possible including institutional vandalism, said police spokesman Pat Melton. The cemetery is owned by the city of Versailles.

The cemetery gates were locked, so it appeared the vandals jumped a 4-foot rock wall, Melton said. Cemetery manager Terry Brown said he was shocked by the extent of the damage.

"I've been here 20 years. I've never seen anything like this," Brown said. "I think there probably had to be three or four or five people, because some of the stones are quite large." 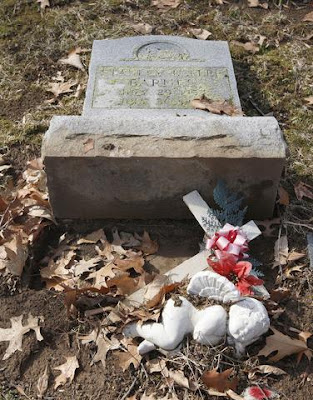