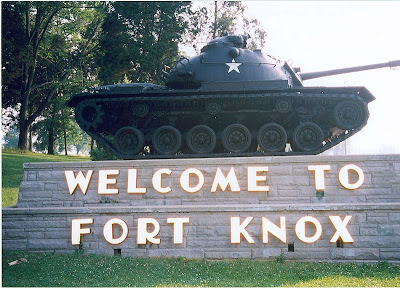 I was surprised to see an article in today's edition of London's respected Times newspaper entitled "Is there any Gold inside Fort Knox, the World's Most Secure Vault?" It says:

For several prominent investors and at least one senior US congressman it is not the security of the facility in Kentucky that is a cause of concern: it is the matter of how much gold remains stored there - and who owns it.

They are worried that no independent auditors appear to have had access to the reported $137 billion (£96 billion) stockpile of brick-shaped gold bars in Fort Knox since the era of President Eisenhower. After the risky trading activities at supposedly safe institutions such as AIG they want to be reassured that the gold reserves are still the exclusive property of the US and have not been used to fund risky transactions.

Wow! And this is the Times, not a supermarket tabloid or a conspiracy rag. But wait, it gets weirder:

A month after President Nixon resigned over the Watergate affair, Congress demanded to inspect the contents of Fort Knox but the trip to Kentucky was dismissed by critics as a photo opportunity. Three years earlier Mr. Nixon brought an end to the gold standard when France and Switzerland demanded to redeem their dollar holdings for gold amid the soaring cost of the Vietnam War.

Many gold investors suspect that the US has periodically attempted to flood the market with Fort Knox gold to keep prices low and the dollar high - perhaps through international swap agreements with other central banks - but facts remain scarce and the US Treasury denies that any such meddling has gone on for at least the past decade.

The article then ends on a still scarier note, mentioning that it's expected that at next week's G20 summit, China and Russia will call for the creation of a new world reserve currency amid fears that the U.S. Federal Reserve is responsible for the ongoing collapse of the global banking system.
Posted by JSH at 8:39 PM

The gold vault is literally at the end of my street. Its pretty scary knowing I live so close to that much money.

My husband works on Fort Knox and I used to work on Fort Knox.I live in Radcliff and drive by the gold vault regularly. I All I know is don't try to relieve yourself on the Gold Vault's outtermost fence....you will be stopped and questioned by the Mint Police. A guy my husband used to work with was mowing around this fence and that's what happened to him....not too smart! There appears to be something there that warrants such a maximum level of security!

Is that Senior Congressman Ron Paul?