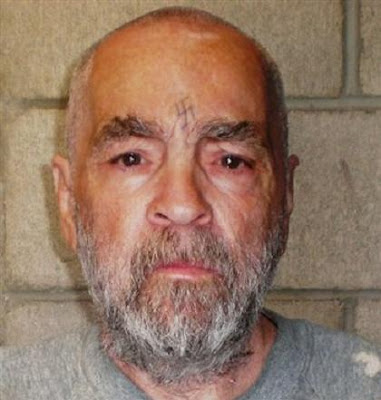 That Kentucky boy Charles Manson from Ashland is in the news again. Much frothing has been going on in the media about a new photograph taken of Manson in prison, and the general tone of the stories has been something along the lines of "Ha ha! Look at Charles Manson now, he's old and gone bald! What a pathetic old schmuck! Ha ha ha!".

It's a bit odd, because I don't recall anything like this sort of mean-spirited petty sensationalism being vented on a prisoner in the news media before. Not even when serial killer Richard Speck was photographed in drag with breast implants in jail. (Then again, I keep forgetting, we do live in a different media era nowadays, where conservative FOX TV hosts and liberal MSNBC TV hosts engage in hurling direct name-calling and personal insults at each other on a daily basis.)

Funny thing is, Manson isn't even really all that bald. Apparently Manson shaved his head recently, and you can even see it clearly growing back on the top of his head. Maybe there's a little male pattern baldness going on in the corners of his hairline, but heck, the guy is, what, going on 75 years old now? Even if he really was naturally bald now, why is that news?

You can read more about ol' Charlie here or on page 103 of your copy of Weird Kentucky.
Posted by JSH at 8:55 PM