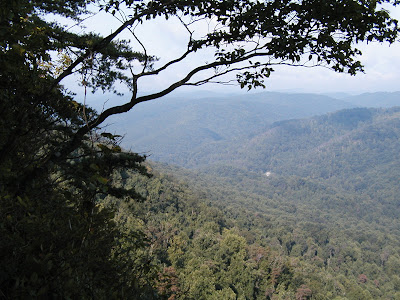 Michael Paul Henson, in his very interesting book Tragedy at Devil's Hollow, tells of a "ghost bride" allegedly seen near Pine Mountain in 1938. It reads like the typical ghostly-hitchhiker story (like, for instance, the "Large Marge" routine in Pee-wee's Big Adventure) but holds my attention for some reason nonetheless.

As the story goes, one Martin Harmon encountered a woman in a wedding dress who hitched a ride during a rainstorm and warned him that the bridge ahead had collapsed. He dropped her off at her house and watched her walk around behind it. Only then did he realize she'd left with his coat, which he'd handed her to warm up with during the drive. The next day, he stopped by to retrieve his coat but was informed by the woman's mother that she had died years ago, and had been buried in - yes, that's right - her wedding gown. And as it turned out, the bridge had indeed collapsed in floodwaters the night before.

Sounds too good to be true? Well, yeah. But at least this tall tale has some provenance. Unlike some chroniclers of supernatural anecdotes, Henson seems to have actually done some research on these passed-down stories. He notes: "I can learn of no sighting of this phantom in the last thirty-odd years, but the ghost of the bride-to-be was seen on several occasions during the 1930s and 1940s, either near where the old bridge crossed Poor Fork of the Cumberland River, or along the road that used to pass close by this stream. The apparition was always seen during or just before a heavy rain storm."
Posted by JSH at 3:12 AM

I want to know where to find the witch grave in Pulaski county that Henson mentions. In the book he decline to give the exact location.