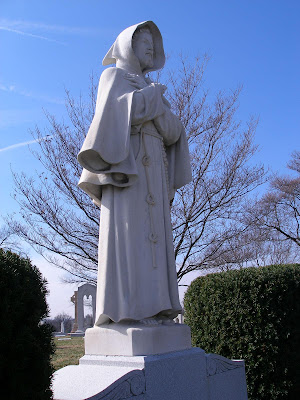 This eerie statue makes an attention-commanding gravestone in Louisville's Calvary Cemetery. Because of the even focus and extreme detail of images taken with a digital camera on autofocus, some of the eerieness is lost here. When you see it in person, from some distance, the face isn't immediately clear and it looks like a mysterious faceless figure under a hood.

I think it's St. Joseph in Franciscan garb, but the three knots in his cincture are oddly and fancifully pretzel-like instead of the traditional Franciscan style of knot-tying.
Posted by JSH at 2:31 AM

That statue is creepy. Doesn't he oversee the priest section at Calvary.