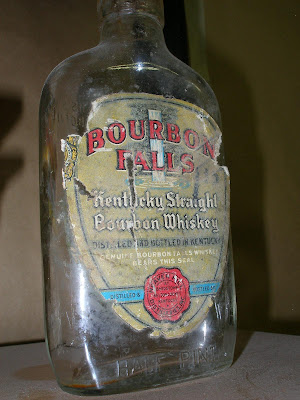 We recently unearthed this antique bourbon bottle that, astonishingly, still has most of its label intact after its long strange meandering mission into time. The label has swipes of mud on it, suggesting it was recovered in a bottle dig, but also has "1.15" written on it in grease pencil, as if it's spent some time on a flea market shelf somewhere along the way.

Bourbon Falls? Never heard of the stuff, but thankfully, the Earth is populated by some hardcore whiskey historians who have many of the pieces of the Bourbon Falls puzzle easily retrievable online.

As you can barely read on the red ribbon graphic at the bottom of the bottle's label, Bourbon Falls was a brand name of Heaven Hill Distilleries, just up the road a piece in Bardstown. According to whiskeymerchants.co.uk:

1783 -- William Heavenhill is born "during an Indian raid which was being waged, under the cliffs near Rowan Creek" at the site of present day Heaven Hill Distilleries.

A group of Bardstown-area investors and the five Shapira brothers, David, Ed, Gary, George and Mose, found During 1934 Heaven Hill Distilleries, Inc., originally known as “Old Heavenhill Springs” distillery. The company had 12 employees at the time of its founding.

Barrel #1 was filled on December 13.1935 Bourbon Falls is the name on the company's first label.

kybourbon.com lists all subsidiary brands and lines of Heaven Hill, and sure enough, there's Bourbon Falls. But just because they're still the brandholder, does inclusion on this list mean they still make it, I wondered? I went to Heaven Hill's own site and noticed they have a section titled "Other Bourbons" that states:

No mention of Bourbon Falls, but if they keep the flame alive on these other historic brands, even in microminimus quantities, there may yet be hope.

And then I found this. Looks like if you wanna get the real old-school Bardstown hooch, you gotta go to Japan. There's your global economy.
Posted by JSH at 5:27 PM