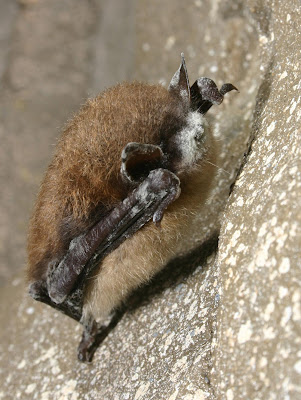 As I write this, it's only a couple of hours since Dr. Margaret Chan grimly announced to the world that we're now officially in a Level Six Pandemic for the virus that causes Swine Flu, marking the first global pandemic in nearly half a century. The first Kentucky cases were reported back in April.

Concerned though I am about the humans, I'm also very concerned about life in general on this planet (and others) - and therefore have spent what some might call an inordinate portion of the afternoon fretting about Kentucky's bat population:

A mysterious disease that has killed a million bats in nine states is headed toward Kentucky caves that hold three endangered species of the flying mammals, lawmakers in Washington were told Thursday.

Scientists have been unable to determine where the disease came from or how to stop it.

Officials first noticed the disease in New York in 2007. Then a caver came forward with a photo taken a year earlier that showed bats with white noses.

The government has closed all caves in national forests in the east, including an estimated 1,000 caves in Kentucky's Daniel Boone National Forest.

Scientists don't think people can "catch" white-nose syndrome, but there was a suggestion at the hearing that a public worried about the disease would stay away from commercial caves, hurting tourism.