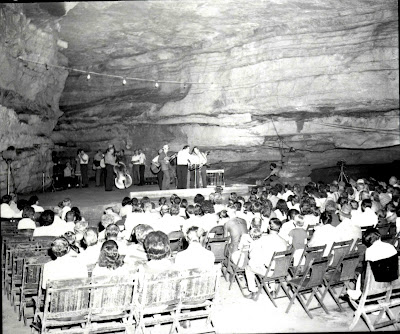 Discovered in the late 18th century, the Great Saltpetre Cave was immediately utilized for its mass quantities of saltpetre, which was used to manufacture gunpowder. According to Wikipedia:

During the War of 1812, sixty to seventy men were employed to mine the cave of its saltpeter, deemed necessary as British blockades prevented saltpeter shipments from overseas. Many of the workers at the cave were slaves. To a lesser degree the cave was also mined during the Mexican-American War and the Civil War.

For a time, ending in the 1970s, Great Saltpetre Cave was a commercial cave, and was open not only for tours, but also for ballroom dances, a museum, and weddings. However, the guests would often damage the cave formations by taking souvenirs.

You can't believe everything you read on Wikipedia, however. The Great Saltpetre Cave actually continued to be available for weddings, and for a yearly Mother's Day event, right up into the 1990s.

Today the Great Saltpetre Cave is owned by the Rockcastle Karst Conservancy, as part of the 300-acre Great Saltpetre Preserve. Sadly, Bluegrass concerts, as shown in the photo above, are no longer held there. The Renfro Valley Barn Dance held its inaugural radio broadcast in the cave in 1939.
Posted by JSH at 1:30 AM