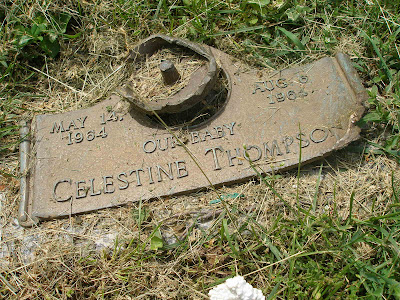 And still another cemetery desecration... according to the May 26 edition of the Courier-Journal:

A Mount Washington grandmother and grandson are accused of trying to sell bronze vases from a cemetery for scrap.

Geraline Hilbert, 63, and Joshua Taggart, 21, were arrested Saturday, May 23, and each face 22 counts of violating graves and one count of theft by unlawful taking over $300, Mount Washington Police Detective Buddy Stump said.

They were taken to the Bullitt County Detention Center, where Hilbert posted a $4,000 bond. Taggart was still being held on a $4,000 bond on Tuesday.

Stump said police received a call from a staff member at Highland Memorial Gardens, 279 Landis Lane, about 8 a.m. Saturday saying someone was stealing vases that had been set next to headstones.

Family members pay $598 for each vase and often fill them with flowers on Memorial Day weekend, Stump said.

After getting a description of the suspects and the van they were using, police called Amen Auto Parts in Shepherdsville, which is the closest business that buys scrap metal.

Hilbert and Taggart were arrested there. The vases have been returned to the graves, Stump said.

I do hope the authorities investigate whether other cemeteries have been targeted by these two. Bronze vases have similarly been stolen from other places, like Louisville Cemetery on Poplar Level in Schnitzelburg, and Eastern Cemetery on Bardstown Road (where the above image was taken).
Posted by JSH at 11:51 PM