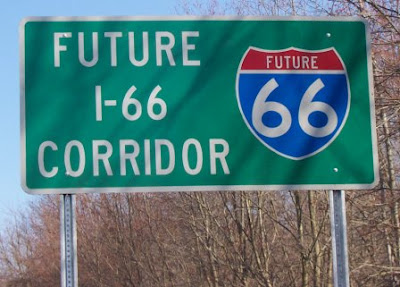 The Courier-Journal is reporting that the controversial I-66 project may finally be dead.

I-66, if you hadn't heard, is a proposed new interstate that would ruin much of the Daniel Boone National Forest and other nature territories in Southern and Eastern Kentucky. The project has long since been given up on by everyone but Gov. Steve Beshear and Congressman Hal Rogers (R-KY) who continue to push for the destructive and unnecessary development. Rogers has, according to his own website, "directed $96 million in targeted federal funding for development of I-66."

According to Elana Schor in the DC Streetsblog:

But even if I-66 lurched back to life in the coming months, the four-land highway still would face stiff challenges from environmental groups. The Kentucky Resources Council is one such local opponent, having taken on the state government in 2007 for attempting to exempt I-66 from an existing river-protection law.

As conceived, I-66 also would cut through hundreds of acres of the Daniel Boone National Forest, raising the prospect of significant environmental degradation in the area. (Incidentally, Kentuckian explorer Boone was the original namesake of the controversial road, but Rogers later took over that role.)