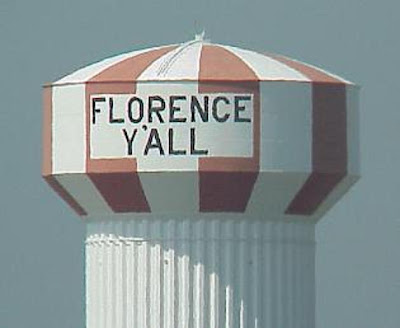 For some reason, millions of people have been enthralled and captivated by the fact that this water tower in Florence, KY bears the nonsequitur "Florence Y'all". I remember that as a child, I was too - I remember seeing it at a young age, probably shortly after the sign on the tower had first been painted. Maybe it's a false memory, but I seem to remember there being no apostrophe on the tower's "y'all" back then.

According to local legend, the sign originally said "Florence Mall" but supposedly had to be changed to avoid violating some sort of signage-zoning law that forbade business advertisements being of a certain height. Another rumor states that the sign was actually a mistake that the city couldn't afford to immediately correct, and by the time they could, it had become a popular attraction all its own. (It was a simpler time in the 1970s!)

I won't go so far as to try to debunk these rumors, but I will note that some things sure strike me as odd. If, as the official version of the story goes, the apostrophe was added when changing the word MALL to Y'ALL, it sure is strange that a space exists between the Y and A to accommodate said apostrophe, one that should not be there if things are as we are told.

The official story also says the sides of the M were whited out to create a Y, but I'm just not seeing that when I look at the Y; it would have been an odd M indeed. Finally, the word "Y'all" is already slightly off-center to the left, but if the Y had once been an M and taken up additional space in so doing, it would have been even more off-center to begin with.
Posted by JSH at 12:24 AM

What about an article on the godawful Water Tower in Clover Bottom, Kentucky, last year that had a ton of county money that could have gone towards useful things spent upon it?

It looked like a rusted out alien walker looming over the hill the morning it was erected, then for a week or two there it was collapsing and forcing the closing of 421 South.

The space is there because of the angle to the legs in the M. There is a photograph in a Boone County history book that was published about twenty-five years ago with a photograph of the water tower with it's original "MALL" paintjob.