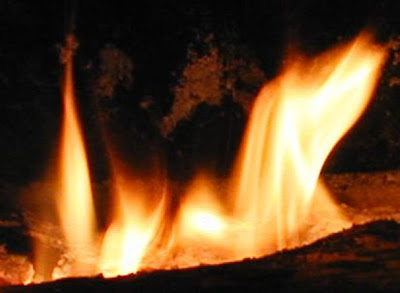 Back in the glory days when Kentucky was being explored by Europeans in the 1600s, the early settlers were dazzled by natural gas vents in the Earth, also known as "burning springs". I'm not sure if history records how someone first figured out there was highly flammable gas spewing from these vents, but if a frontiersman bearing a torch happened to walk up to one, I'm sure what happens next would be quite a shock!

Today, Kentucky still has a town named for one such gas vent: Burning Springs, KY in Clay County. Burning Springs was once a bustling place, but its post office closed in 1965 and it's currently listed as an unincorporated community. According to Robert Rennick's "Kentucky Place Names" book:

"A very early settlement, it was named for the ignitable springs of natural gas, in seemingly inexhaustible supply, discovered before 1800 at several sites in the area."

Another Kentucky burning spring was in Magoffin County, which dried up in 1900 after being tapped by an oil & gas company in the 1880s. Today the small community named Burning Fork is a remnant of those days. This spring was a literal spring of water, which emitted from the ground mixed with the natural gas. According to "A Library Of Wonders And Curiosities Found In Nature And Art, Science And Literature", by I. Platt:

A spring here breaks out at the foot of a hill, forming a basin of water about six feet in diameter and two feet deep, at the bottom of which issues a stream of gas, which in volume and force is about equal to the blast forced from a common smith's bellows; but there is no cessation of its force, which is such as to create a violent ebullition in the water. Being heavier than common atmospheric air, the gas, on passing up through the water, constantly occupies the surface, which is still the lower part of an indenture in the earth at that place. On presenting a taper, this gas instantly takes fire, and burns with great brilliancy.

Yet another one was near Beaver Creek in Floyd County, mentioned by Lewis Collins in 1847 his "Historical Sketches of Kentucky". According to Collins, the local gas vent was known as a "place of notoriety" to the early residents of Floyd County, and marveled at how the site "instantly ignites on the application of fire".
Posted by JSH at 12:49 AM

Probably explains a few of those stories that people like Frank Edwards used to tell in their books about people that would be walking around in their yards and then just instantly disappear never to be seen again.

My Grandfather told me when I was little, late 70's early 80's about a gas well like this in Caldwell Co. It could be an "offchute" from gas and oil wells tapped in Hopkins Co.