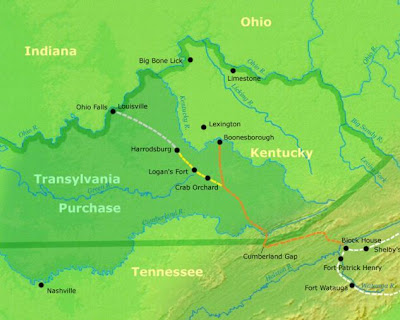 It's not widely known that most of the area currently known as Kentucky was once called "Transylvania". The land was purchased from the Cherokees by explorer Richard Henderson, who hired Daniel Boone to help him build this new colony.

When history books tell you about Boone eking out the Wilderness Road and setting up Fort Boonesborough, they usually neglect to mention that he was doing this specifically for Transylvania, not Kentucky. The last remaining vestige of this great lost land is Transylvania University in Lexington.

Boone's exciting land of he-man adventure and freedom was soon quashed by a conspiracy of politicians, bankers and financiers in the neighboring state of Virginia. Transylvania and Kentucky were declared by a crooked judge in a rigged court to be the property of Virginia, and so they were absorbed into it. Since Kentucky eventually broke free and became a separate commonwealth again, we maintain that Boone and Henderson's prior colony of Transylvania should still legally stand today and regain its rightful place.

Even today, many Kentuckians look to Transylvania as a symbol of Kentucky's former frontier glory days, much in the same way the Weimar Republic is viewed as a symbol of more glorious times for Germany before World War II.
Posted by JSH at 12:20 AM

I haven't yet ascertained what Thomas Jefferson might have preferred Kentucky to be named. You see, in his hay-day, he wanted to break up many pre-defined territories and form States named variously as, Chersonesus, Sylvania, Assenisipia, Metropotamia, Polypotamia, Pelisipia, Saratoga, Washington, Michigania and Illinoia.

It is connected to what is known as the Northwest Ordinance, which doesn't explicitly involve Kentucky, per se. Still interesting though.

"Polypotamia (‘Land of Many Rivers’) and Pelisipia would have covered the western and eastern parts of Kentucky, mainly (and therefore are partially outside the Northwest Territory, as it is bounded to the south by the Ohio River, Kentucky’s northern border)."