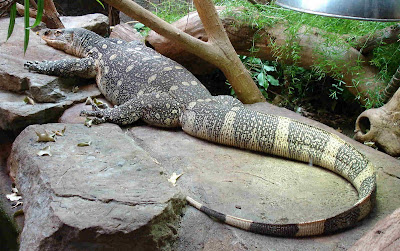 In the summer of 1975, a cryptid described as resembling a 15-foot monitor lizard was sighted multiple times at Canip Creek, near the town of Milton, in Trimble County. It's come to be known as the Milton Lizard, sometimes called the Canip Monster.

Clarence Cable, manager of the Blue Grass Body Shop, saw the hissing creature come out from behind some wrecked vehicles. Cable said it had "big eyes similar to a frog's... Beneath its mouth was an off-white color and there were black and white stripes cross ways of its body with quarter-sized speckles over it."

The lizard was described by Cable as having a long forked tongue and huge, bulging, froglike eyes. Its skin was said to be black and white striped, and with small speckles. After the concentrated flurry of sightings in 1975, it was never seen again, leaving Fortean researchers to wonder.

Some have theorized the Milton Lizard might have been a monitor lizard (pictured above) that somehow got released into Kentucky's ecosystem.

(The city of Milton's other claim to fame, incidentally, is that the Rat Pack film Some Came Running was filmed here.)
Posted by JSH at 12:40 AM

One night when I was working in Berea a few years ago and coming home in the wee hours of the morning. I passed what looked like at least a four-foot lizard sitting in the right lane. Thing creeped me out.

The lizard in the pic looks very similar to what I saw in Berea. It wasn't anywhere near 15 feet long. But it was big enough to scare a person. So, I think there might be some monitor lizards living in the Madison County area and since I saw the one I saw at about 3 AM, I guess they are nocturnal creatures or like for things to be calmed down a bit traffic wise at any rate before they poke their noses out of whatever holes they're living in.

I did a little research on lizards and I think it could have just been a larger than average Gila Monster that I saw. I think the mind can play tricks on one especially at in the morning so maybe it looked bigger than it actually was. There could be an undiscovered monstersauria lizard species living in Ky, but probably a better explanation for where the lizard I saw came from is that it hitched a ride on some truck going to Wal~Mart, McDonald's or one of the other stores out there near exit 76, and hopped off while one of the drivers was doing a delivery.